I didn’t blog about this, but here I am about two or three weeks ago: 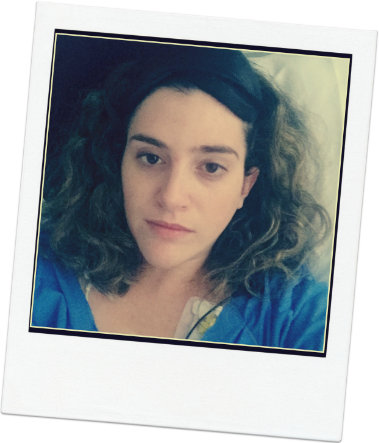 Chillin in my hospital room at Boca Regional

Not at my best and brightest.

This selfie was just a blip in the maybe three hours of consciousness in those few short days as we struggled to snuff out the migraine spiral that didn’t seem to have an end! A few days of IV depacote and they let me out, and from that point I was DETERMINED not to let another bad flare keep me from yet another year of this conference. I’ve wanted to go every year since I’ve been diagnosed! Me and my heparin-induced black belt had to get our shit together. 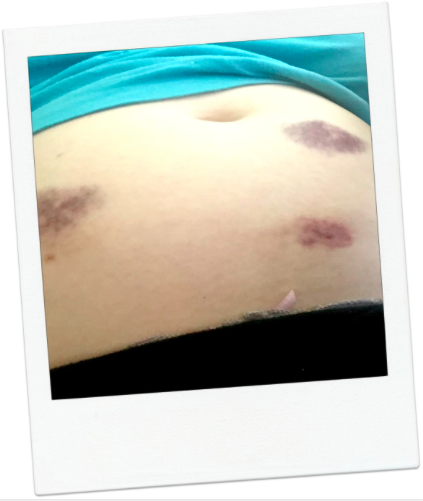 There was a lot to strategize for when it came to this conference. For one thing it involved traveling. We had booked tickets (both plane and hotel) months in advance. That was brave. We took Jetblue and chose the Seats 1A and 1B with extra leg room. These were good because they meant less walking/carrying heavy bags/ less having a panic attack while walking down the plank towards my seat/ less possibility of having a panic attack while needing to use the bathroom 14 times during the flight. (Which, inevitably always occurs.)

I was debating whether or not to take a Xanax. I wasn’t necessarily nervous that morning. My migraines had settled themselves somewhat, but my gastroparesis symptoms had been a little haywire the last few days. I’d played it cool and had just been drinking Ensure and eating puréed soup the day before. In the airport I bought a club sandwich, hoping I’d be settled enough to eat on the plane.

I ended up not taking any meds—but I did have some form of therapy.

Yes, oh my god, what luck! Sitting right behind me was a woman transporting a 10-week-old shitsu. I told her I was falling in love. She pulled the dog out and asked me if I wanted to hold him. 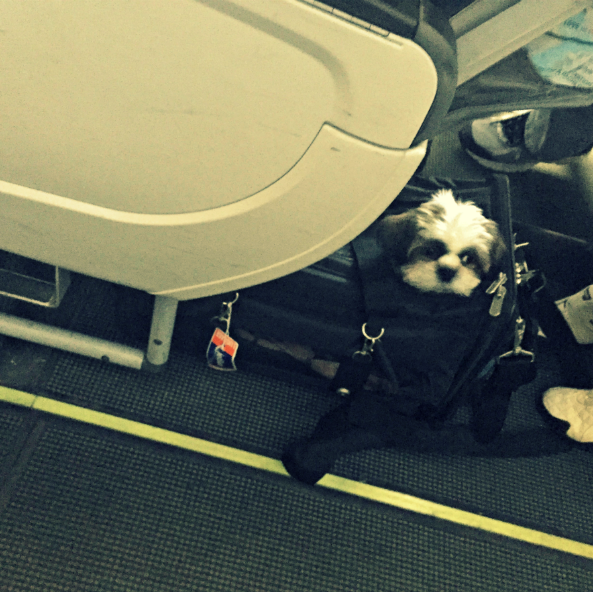 I’m like, “Do I want to hold him? YESIWANTOHOLDHIM!”

And that’s how I spent several minutes cuddling a soft, sweet puppy in my arms during what is usually an otherwise traumatic experience for me.

After that I felt much better. At least until we started to descend. Then that club sandwich felt like it was starting to come right back up.

The problem is the drop in pressure. My brain and heart are still 2,000 ft up when the rest of my body is much closer to the ground.

Fortunately we had great flight attendants who let me into the front area to pace a little bit and let me do some breathing exercises and stretches. Eventually I got back to my seat, we landed, and into Regan Intl. Airport we went!

Even though I wasn’t drugged up, I was still dazed getting off the plane and my mom had to steer me to baggage claim. We hadn’t decided how exactly we were getting to the hotel (Uber, taxi, or shuttle) we were going to see what was cheapest when we got there. I got us tickets for a shuttle—which we promptly missed the call for. Then called us an Uber, which if not for my mom steering me towards, I think we would have also missed.

I can’t handle airports. Or travel. Or possibly just life in general.

Our driver’s name was Sayid. This was my first Uber experience, but if they’re anything like Sayid was, I’m a fan. A lifer. Sayid and I are solid. While our ride was a harrowing hour drive through rush-hour traffic, he told us about his life, his diet, his heart attack, his wife, the time he met President Obama at the hot dog stand he and his brother used to own. He even showed us the picture on his iPad (while the car was stopped.)

When we finally got to the hotel I felt like I had swam across the ocean. Not to be dramatic or anything.

I could see the cocktail party was in full swing. This conference was HUGE. Like people were spilling out of the registration area. And while part of me was ready to check my bags at the front desk and run over and get my name tag—the part of me that had any business even being there was like…girl…you need a nap…and gatorade…and to brush your hair…and a nap.

We checked in—to the 12th floor—(whose idea of a joke was that, Hyatt???) I dropped my bags on the floor, whipped off my bra and was asleep before I’d had a chance to inspect the mini-shampoo bottles.

As soon as I woke up we got dressed and headed down to registration and cocktail. We got our lanyards which were not JUST lanyards with name tags— they also doubled as holders for our USB’s which included ALL of the slides from the entire conference. Um, wow. 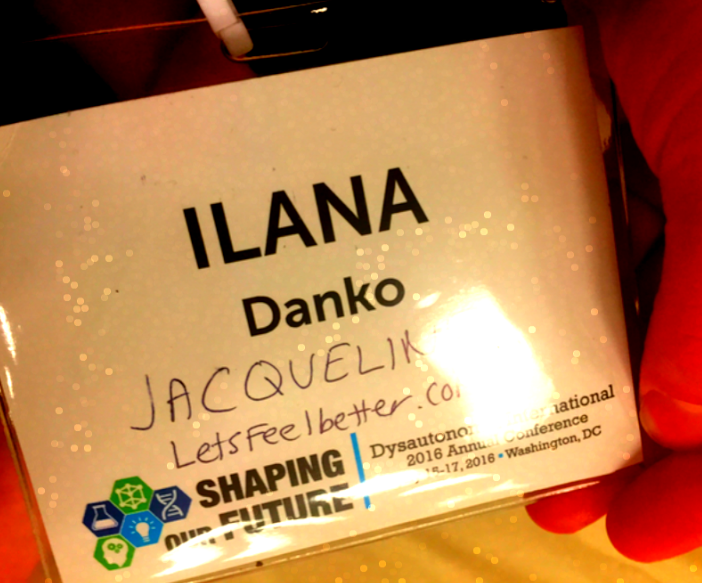 We also got welcome bags which were neat! They had a bunch of schedules and sheets on Dysautonomia International and what to expect throughout the next two days. They also included some product samples like SaltSticks and Pickle Juice.

The first person I met at registration was Wendy Baruchowitz who was giving a great lecture on POTS and nutrition later that weekend. 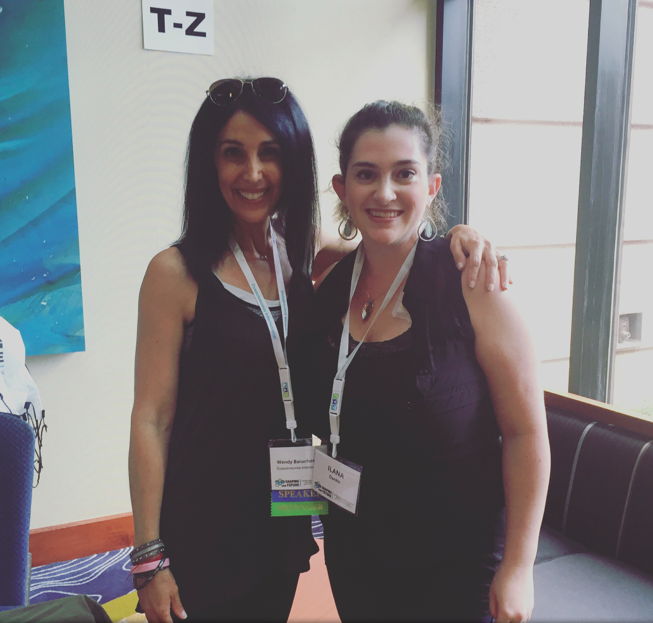 The next person I met was essentially, spiritually the person I NEEDED to meet—Heather. You know how I’m basically having an existential crisis about how I’m never going to have children because my disease is out of control and my medication is keeping me alive and my medication is not compatible with pregnancy?

Yeah, well, Heather has POTS. Heather has migraines. Heather has a kid. And she was pregnant with another! SHE WAS STANDING ON HER OWN AND EVERYTHING. She was eating food, and not writhing on the floor in pain, and not running through the the convention hall trying to put out the fire in her nerves. She was just just chillin’. 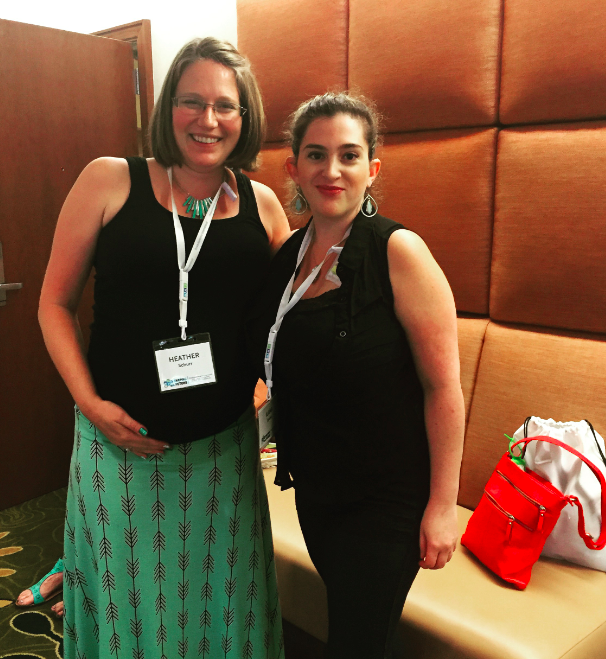 She was so nice and totally didn’t mind when my mother and I immediately harrased her and her mother and demanded that they sit and talk to us and tell us every detail of their lives and how she exists. As far as the medications she survives on: I remember some but not all and some would apply to me, but not all. But I got her contact info so I’ll be able to follow up on that.

After that we chatted up everyone who couldn’t run away fast enough, until finally we decided to stop and rest for dinner at the hotel restaurant.

Coming up: The Speakers, The Award Ceremony, and the People I Won’t Forget.

Were you there? What did you think of the opening activities at this year’s conference?

July 20, 2016
ChronicIllness 29 comments admin
← The Facts I Would Tell Newly Diagnosed POTS Patients 2016 Dysautonomia International Conference: Meeting Everyone Who Ever Had POTS (Part 2) →

29 thoughts on “2016 Dysautonomia International Conference: Getting There (Part 1)”