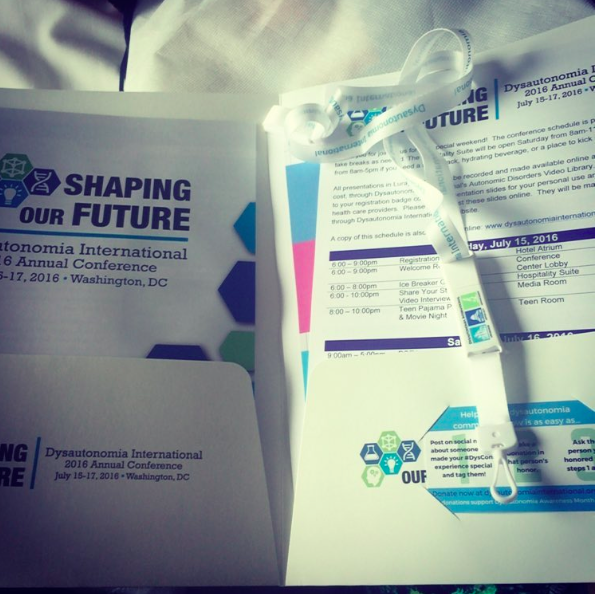 Thanks to @Salty.Sassy.Tachy for this pic.

The next morning we were pretty much determined to hit up every lecture—and there were a LOT of lectures.

First we stopped and had breakfast with a few other potsies, including Nora Burd who was teaching a yoga class the next morning. It was great to hear her story and now I’m following her religiously on instagram. 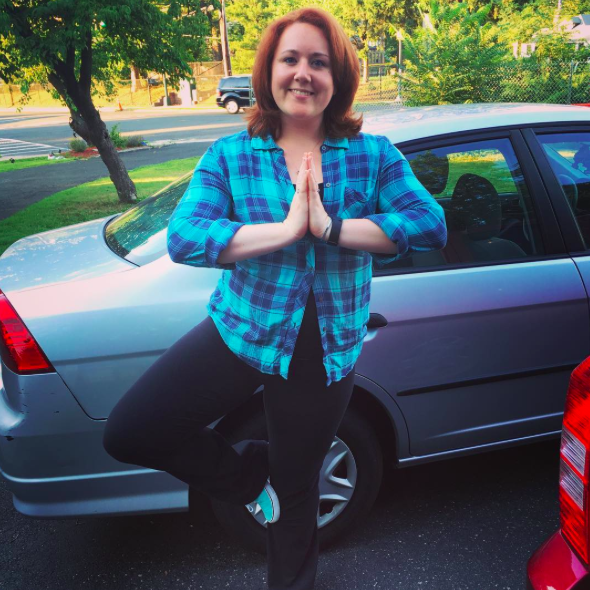 Thanks to Hero_Yoga for this pic.

After a really delicious breakfast buffet, we stopped into the main ballroom for Lauren Style’s and Ellen Kessler’s opening remarks. They talked about the Pots Research Project that would be hosted at the convention where all patients would have an opportunity to be a part of the program and donate blood and participate in a few autonomic tests. I think we were all pretty excited about this—considering how little research most patients feel is happening in the field.

After a speech on an overview of autonomic disorders my mom and I got to meet some facebook friends that my grandfather had been connected to before we even knew they both had grandkids with POTS.

Danielle and her mom were really cool, it was a bummer we only got a quick moment to chat before the next round of lectures started. But again, we’ll stay connected on instagram and FB!

At this point I was swaying. It’s around 11ish that breakfast starts to hit me and my hypersomnia starts to get the best of me.

“Do you want to go back upstairs?”

“The next lecture is on chronic pain management in dysautonomia,” I said looking at the schedule. With my issues the last few months, there was no way we could afford to miss that.

Even though I was struggling to keep my eyes open during this one (by no fault of Dr. Sandroni) I had to say I was pretty disheartened by her updates. I’d been there and done ALL of that. There was really nothing on her list that I hadn’t tried to use to manage my disease. When I asked a question at the end she made sure to assure me that the key words here were “chronic” and “management.”

This pain is here and it’s going to stick around, so I’ve got to find techniques that make it easier to live with.

But I knew that. I guess I was just hoping some wild unicorn powder cure had been unearthed in the last few weeks while I was sleeping.

Anyways, we did head upstairs after that and I crashed pretty quickly. We came down late for lunch and with my limited GP diet there wasn’t much to eat. Which was pretty amazing considering they had something for every gluten-free, dairy-free patient in the room. Even girls with feeding tubes were picking at things. I think my brain was just stuck on “steakSTEAKIwantSTEAK” all weekend.

We checked out some of the vendors after that. My mom has a lot of allergies and strange reactions so we picked up a copy of Dr. Lawerence Afrin’s book on living with Mast Cell. We also picked up some ELITE dysautonomia hoodies which I recommend to everyone because they are SUPER cozy and I want to basically live in mine for the rest of my life (and I basically did for the rest of the conference—as did pretty much everyone else who got one.) 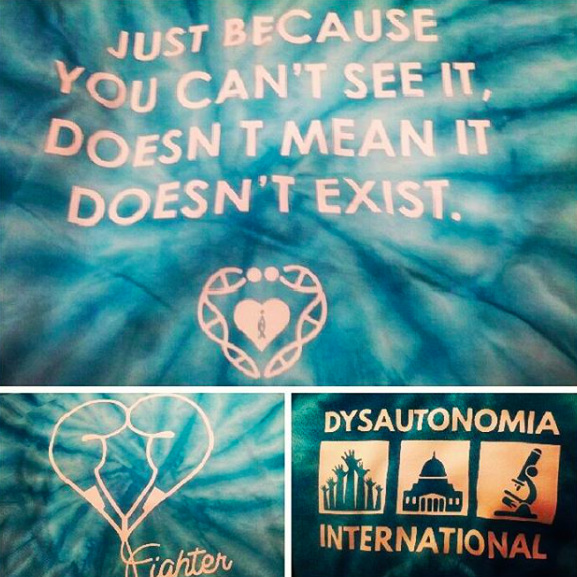 Thanks to @actsgeekprincess for this pic!

Then one of the most important segments for me in particular—cognitive function with orthostatic intolerance. Dr. Raj handled this session, but he did start it off by assuring us there really wasn’t a way to stop brain fog.

His segment mostly explained how POTS is not depression, it’s not a psychiatric disorder, POTS has no significant sleep problems that relate to brain fog compared to the general population. He said that more studies are needed to find the impact of standing, the underlying causes and optimal treatment strategies for brain fog in POTS patients.

Some things that have been tried are METH—no wait, sorry, methylphenidate (AKA: ritalin) and adderall. You can also try throwing some narcolepsy medication at it, but from personal experience that didn’t work out so hot.

I STILL CAN NOT BRAIN TODAY.

So coming out of the conference knowing that (for me, at least, and this is certainly not the case for every POTS patient because everyone was at a different level and all patients react differently to different meds) for me I’ve kind of hit a wall within some of the sub-conditions of my disease. That’s a hard pill to swallow.

So I think, even though meeting these doctors gave me a lot of hope that we’re getting closer to better answers—that wasn’t what I benefited most from during the conference this year.

That night we dressed up and went down to the awards dinner. At this point I was really glad we were staying at the host hotel because we’d been able to go upstairs and nap a few times throughout the day and I wasn’t feeling so beat up. Not only that—as I was getting dressed it occurred to me that there were probably 500 other POTS patients right now, feeling that same slight fatigue but strapping on their heels anyways. 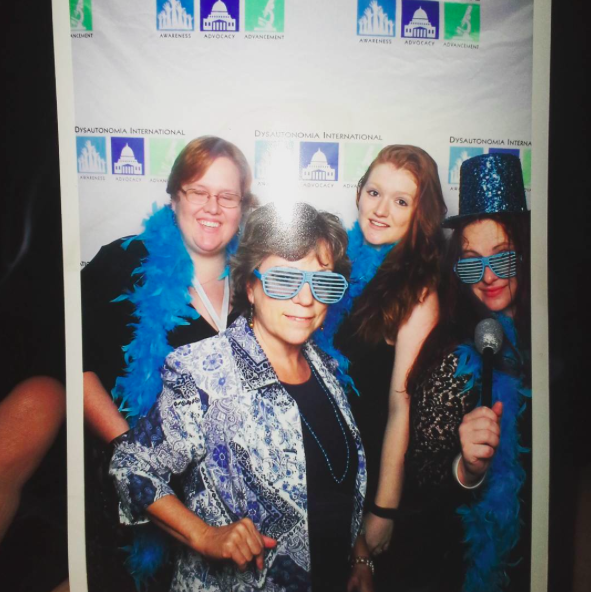 Thanks to @Carriespins for this pic!

Downstairs was bustling with a silent auction and a classical pianist . There was a fun photobooth and when they opened up the expanded ballroom (which was massive) they told us right away to go ahead and grab our food.  There was something for everyone (and I’ve got to say that for the price of the conference, the meals included were pretty on point. All were buffet style so it’s not like I really went hungry.) They had a taco bar (WITH STEAK tacos) and tofu tacos, a sliders and mini-hot dogs bar, and a macaroni and cheese bar with several different varietes including lobster mac and dairy-free (which I was excited about.)

Then the aways ceremony began. Dr. Jeffery Boris won the Physcian of the Year Award and brought the whole room to tears when he thanked his patients, the community, and then his own family and his parents who had come to the event. It was clear to see that he really had a lot of empathy and love for his patients, so many of whom were at the event and ran on stage to get a group picture with him as he got his award. 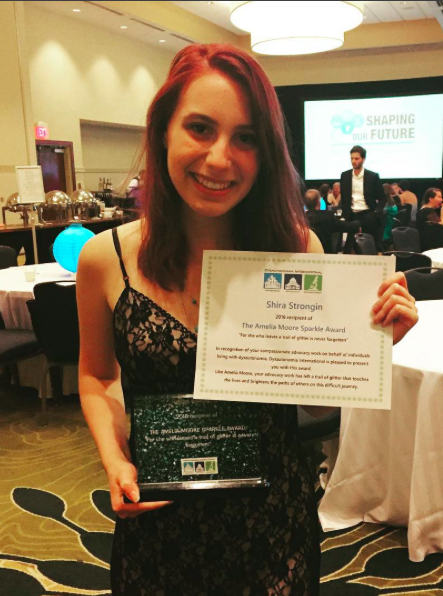 Shira after she got her award on stage.

The last award was the Amelia Moore Sparkle Award presented to Shira Strongin—a name I’ve heard a LOT, but never got to meet. Shira is a frequent volunteer with Global Genes and all over the POTS and rare disease advocacy community. I was really excited to meet her and pick her brain for a minute!

We also sat with these two awesome chicks who we got to get silly with. Fun fact: Kala has actually heard of and driven through the incredibly small town that my sister-in-law moved to that I was pretty sure no one had ever heard of. Small world! 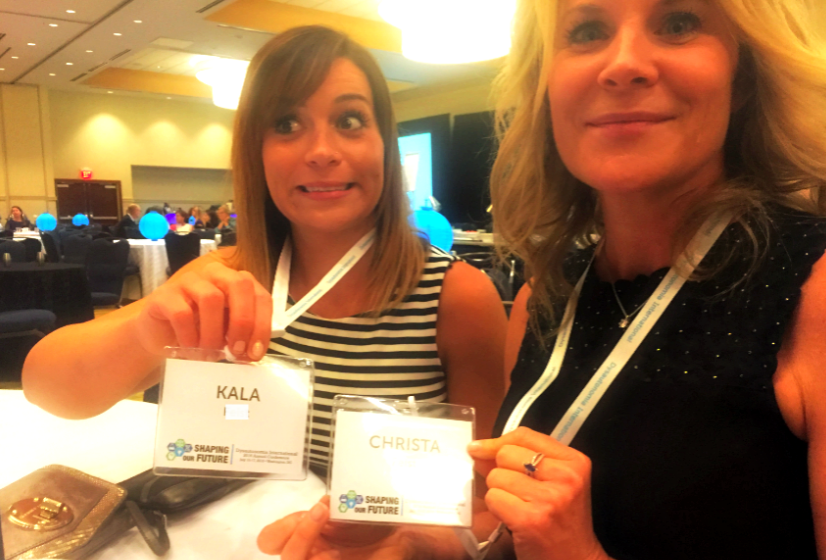 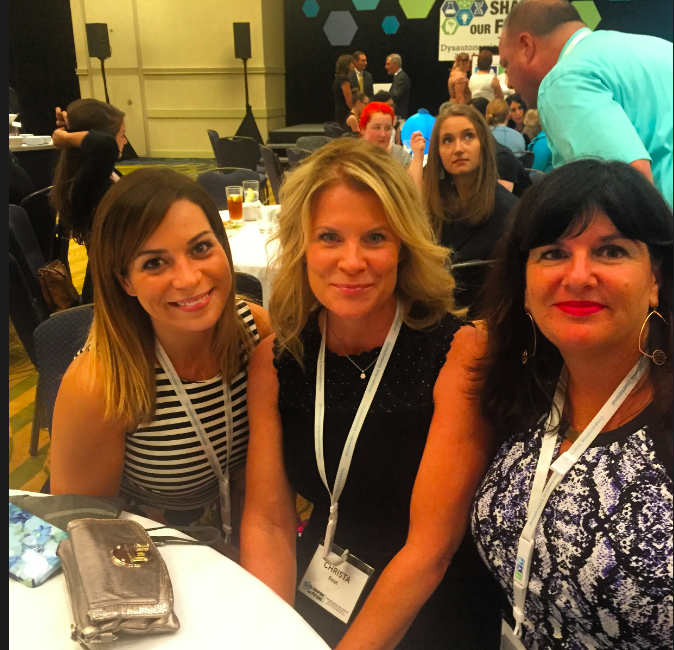 Can you believe that was all just day 1?

Yeah by day two we felt like we’d been hit with a sledgehammer. We had breakfast with a nice couple and their bichon therapy dog. I’m sorry, but is any conference going to be as fun as this one ever was? There were dogs EVERYWHERE. I know I’m not allowed to really play or touch because they’re service dogs, but just like…they’re dogs. All they have to do is literally just exist around me and I’m happy.

A lot of people have asked me, well, why don’t you get Happy licensed as your therapy dog? And it’s something I’ve thought about. And I still might do—exclusively for myself for situations where I’m in the hospital long term. But Happy, as much as I adore him and want to say that he would lead me confidently into the night—would probably walk me straight into a lake if I gave him the chance. And as far as coming in to cuddle other patients? He plays parkour on people’s legs, scratching their thighs when he jumps, he barks, he marks, he’s full of love and energy—but it may just not be the kind suited towards therapy for others. (Again, maybe just for me.)

We decided to take it easy on Sunday. We went to a yoga class, (shout out to Emily Deaton and her mom Janet who showed up some great exercises to do without totally killing ourselves.) I did my autonomic testing and blood draw for the research group—and then we sat and we just spoke with other people. We had a great lunch and met up with a girl named Skylar and her mom. 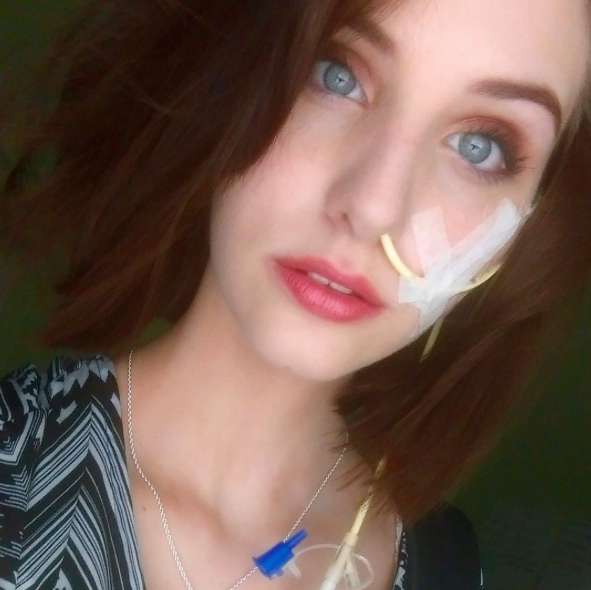 Thanks to Chronically_Blessed for this pic!

It’s so interesting to see how people handle the stress of their disease and Skylar is no exception. She had questions for me about my port, but had tubes of her own and a medical history similar to mine. She talked about relying on her religion and blogging and even though I’ve never really used religion as a coping mechanism myself—she had such a beautiful way of speaking about her faith and how it helped her manage her stress. I hope that others find comfort in that too. She shared her blog with me. You can also find her on instagram.

There were so many wonderful people we met and I know I’m leaving a few out but this post is getting ridiculously long. Thanks to everyone who came up and said hi—and to those who said they recognized me and read my blog (I just about died anytime someone said that.  You made me feel super glamorous while I was stuffing my face with dairy-free macaroni and cheese.)

I also want to say a big thanks to my mom (@DsProducer) for taking me. I could not have gone without her (for sooo many reasons.) But she is the most fun to travel with (and just to be with in general) We met a lot of moms and daughters and I think if POTS has any major global side effects—its that it bonds moms and daughters. We met too many besties just like us to be a coincidence.

Will follow up with how my journey back to FL went in a new post soon. Spoiler alert: not so good if you’ve been paying attention to my FB. (Travel stress + GP flare = Are You There God? It’s Me, Ilana.)

July 25, 2016
ChronicIllness 23 comments admin
← 2016 Dysautonomia International Conference: Getting There (Part 1) Here’s What I Eat When It Hurts to Eat Everything →

23 thoughts on “2016 Dysautonomia International Conference: Meeting Everyone Who Ever Had POTS (Part 2)”