In the 22 years that I’ve stuck it out– I’ve owned companies, met my soul mate, am raising my second poodle, live in a decent apartment, am one credit shy of my degree, published articles, published books, met some heroes, made some friends, and one more thing….

…was diagnosed with not one, but two rare diseases with doctors estimating there must be one more that remains undiagnosed. 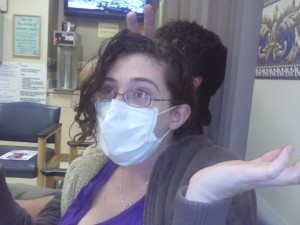 Considering the fact that I’m TWENTY TWO as in not EIGHTY TWO I can sometimes get a little pissy about the 10 medications I take every morning to wake up, the five hours I spend every week getting infusions, and the fact that even during my best months—I can’t always maintain my client base with my continuously interrupted schedule.

Lately it seems that If you were looking for a pattern to my life, it would be one step forward and two steps back.

I’ve learned some things since my body up and crapped out on me: Chronic illness is complicated.

Like when you miss your best friend’s birthday party because of it.

Or when you hem and haw about buying plane tickets to New York because you just don’t know how you’ll feel on those days.

Or when your dog just wants to play and you just can’t.

Sometimes it serves a purpose. Like knowing all the best pick-up spots for chicken soup. Or always having a spare painkiller/anti-histamine/lozenge/sleeping pill in your purse for the friend in need. Or just being the one who constantly makes the whole group take bathroom breaks when one of them has just drank a 42oz Gatorade.

But however limiting, degrading, time and energy thieving chronic illness might be—life with it is (ironically) all about making choices.

The more I learn about my disease, the more I try to take responsibility for it. I recognize that whatever I do right now is going to affect me later on. I know that NOT speaking up and going to the doctor when symptoms strike usually means that they’re going to get worse, not better. And I realize that not sucking it up and dealing with it on certain occasions can mean the difference between the people around me respecting me or alienating me.

Life with chronic illness is about managing expectations while keeping the hope alive enough to still make plans for the future. Its knowing that there is nothing wrong with wanting when there is still the hope of having.

I’ve thought about a lot of ways I could cope with all the mishegoss in my life. After some research I realized that support groups are depressing and misery?—boy, it just LOVES company. I also got that listing off my complaints one by one to my boyfriend is probably as painful to him as his recounting a particularly intense chemistry experiment to me.

Which is why I’ve been kind of stumped about whether or not to start a blog. Rewind: To me, blogging is like the number one solution to any problem in my life. Unemployed? Start a blog! Stressed out by pet ownership? Blog about that sh*t! Ten pounds overweight? BLOG IT FROM THE MOUNTAIN TOPS!

But what could blogging about a chronic illness really accomplish? Was it going to make me feel better? Last time I checked blogs can’t pull out an infiltrated IV—I don’t even think they even qualify to dispense ibuprofen.

So I did my research and started to see what chronic illness bloggers were actually getting out of their websites. After some reading I started to get it—here were all these posts bitching and complaining and getting melodramatic about the woes of not being able to get through the grocery store—and I realized: that was such a simple problem. Hell, I’ve had that problem for years—and now I know how to deal with it. Because I’ve been there.

I’m like a chronic illness genius compared to these ND&L’s (Newly Diagnosed and Lost.)

I have notebooks full of tips on how to not die and how to even LIVE on a daily basis. I could probably, actually help someone have a significantly less sh*tty day!

September 2, 2012
ChronicIllness Writing and PR 14 comments admin
The 7 Things You Should Bring To The Emergency Room →