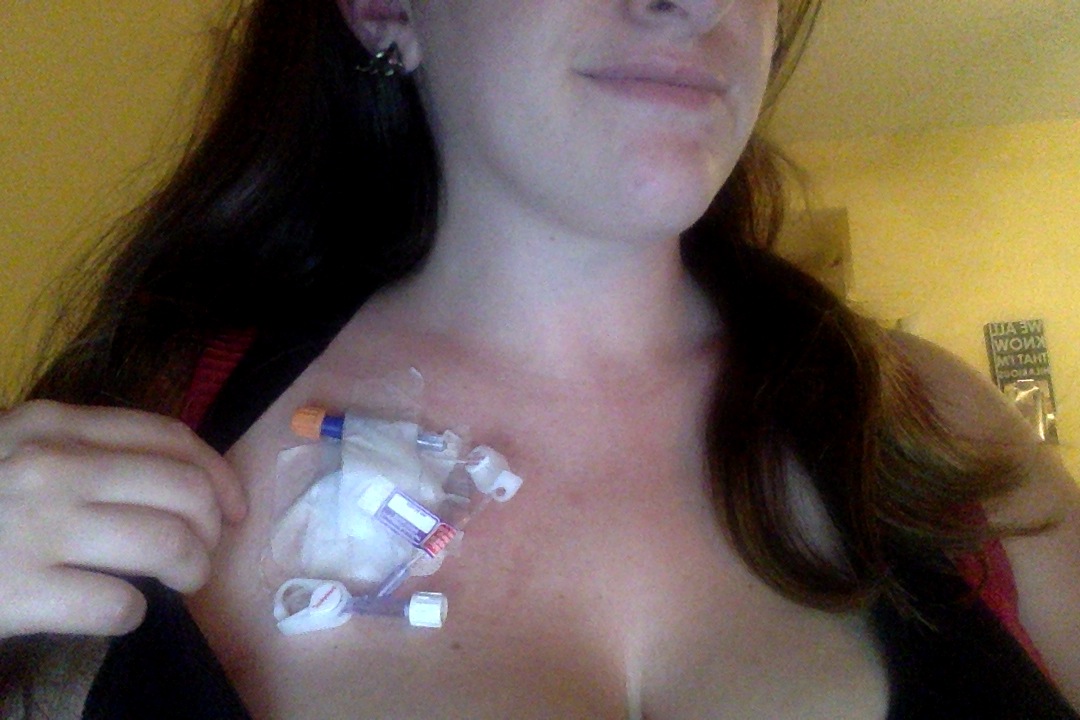 Sometimes common sense just isn’t an option. This is mostly when I’m exhausted, dehydrated and so beyond my limit that I burst into tears trying to open the cap on my water bottle.

My home infusions have been going MUCH better. I was doing a 500 bag of saline every day last week and it was ROCKING. The only problem came on Monday night. I didn’t get home until around 9:30. I hadn’t eaten. I was unloading a giant bag of infusion supplies on my kitchen table and after trying (and failing) to hang a heavy bag of saline on my pole, I just started handing things to R.J to open and deal with.

I pulled out a syringe of saline to make sure my line was clear. I pushed it, but the plunger wouldn’t move. I checked my line to make sure I had everything open, had followed procedure…and realized I’d forgotten to unlock it.

Did that, then pushed again–thankfully the saline went in! But when I pulled back out to see if I had blood return–the plunger got stuck. Took it out. Tried with another syringe, this one was able to pull–but still no blood return. Maybe I just needed a break.

I sat down and ate my dinner, then tried one more time. No blood. I texted my home nurse to see what she though–and she said sometimes that happens and to just go ahead and do the bag.

Halfway through the bag I started getting chest pain. Tired, unable to think of anything else to do I went to disconnect my line. Since I was going back to the infusion center to get a new line put in the next morning, I didn’t think twice before disconnecting. I should have though, because I completely forgot to flush it with saline and heparin. Feeling like an idiot–but without any options to fix my mistake, I went to bed.

My port was really sore that night and I had some redness around where the bandage had been all week. I know I’m allergic to adhesive, but I’d never had it on for so long before. It didn’t look good.

Next morning at the infusion center the nurses did a skin prep over the port to try to reduce the redness. They stuck me another four times. Not unusual, but pretty excruciating all the same!

As soon as they put the occlusive bandage on, I knew I was in trouble. My skin was BURNING. I pulled the bandage off when I got home, my skin felt like it was on FIRE. I frantically called the home nurse and asked her what do I do?! She said to let it be for a while and then put on a new bandage–but my skin was a little too sensitive, even an hour or so later, so I ended up having to pull out the line completely (you can’t just leave those things exposed.)

A timeline of my port over the course of that afternoon. The last one is from earlier in the week.

I let my skin heal and dealt with the ensuing dehydration migraine later in the week. Then, this morning, I had my port study at the hospital.

I’ve been worried about this study for a while. I knew I had to have it done but I was unnerved about what it might reveal and whether or not I’d be looking forward to another few days in the hospital having surgery.

Do you know that moment when you’re so worried about something that you start bargaining with the universe? I was there.

My argument was this: universe–if you let this port work and I don’t have to have another surgery I will atom-bomb my fear of flying and book plane tickets to NY for R.J’s graduation. I had my phone and laptop ready to go. The second I got word that everything was alright, I was booking those tickets. I drove to the hospital alone and just kept telling myself, everything will be fine, everything will be great, and I’m going to book those tickets.

The port study was intimidating only because they had me in pre and post op area and it was the first time I’d ever been there by myself with no one to watch my purse. But no anesthesia was used during the procedure, so I knew I’d be able to drive myself home one way or another.

They tried to insert my line under a live x-ray. The problem, we found, was that the thing was just sliding all over the place! I guess my surgeon hadn’t stitched the port down to the actual muscle. Even when the radiologist tried to insert it, he missed, and hit the side. After a few more tries–and then thankfully some wonderful lidocaine–we got the line in and working!

I had to do a little gymnastics and had to hold my breath when he inserted it, but the actual structure of the port is FINE. Nothing is broken, the catheter is right where it’s supposed to be! I can’t even begin to tell you what a relief it was to see it working like it should. The fear that I might have to have another surgery to remove or replace it….I don’t even want to think about it.

They gave me some extra-strength blood clot remover that they injected into the port and then removed it two hours later.

By then I had already booked the tickets.

And by now I’ve realized that I pretty much just hustled the universe on that one. My port is fine and I’m going on vacation.

April 4, 2015
ChronicIllness 29 comments admin
← But…Like…What Do You DO For a Living? 5 Empowering Songs To Help You Say “F*ck You” To Your Chronic Illness →

29 thoughts on “Bargaining With the Universe: What I’d Do For a Good Port Study”