Each time I sit down to watch The Walking Dead on AMC, it saddens me to know that in the event of a Zombie Apocalypse, I’m going to die first. 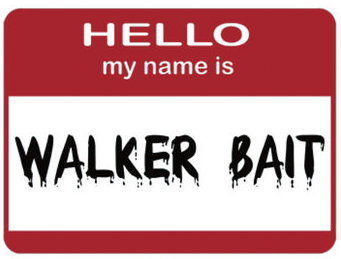 It’s just a fact, and except for some residual grief over who will dress my poodle in his warmest coat on cold winter days and throw his tennis ball for the 9,5675th time—I’ve pretty much come to terms with it.

See, this is how it will play out: let’s say it’s a virus that sets off the whole “let’s eat each other’s brains” thing. Being immunodeficient, it’s going to be pretty darn hard for me to ward off that flu. Between going to doctors and the hospital, those cryptic little germs will be festering everywhere.

And let’s just say, for whatever awesome reason, I survive the beginning phase of the whole apocalypse and I actually end up living long enough to see the majority of the population turn into a sleep-walking herd of the undead. What am I supposed to do then? Run with this terrible joint pain in my knees? Stab forward into the dense skulls of our enemies with no upper-arm strength? I mean, I’m just going to slow R.J down.

Don’t worry. We’ve already had the conversation about it. We both know that in the event of the world ending, he needs to go on without me. He’s strong and capable, and he can protect Happy-Bear from the flesh-munching, guts-oozing corpses. He could forage for food and supplies and eventually put together a rag-tag gang of survivors including an ER doctor and Dwight Schrute from The Office. 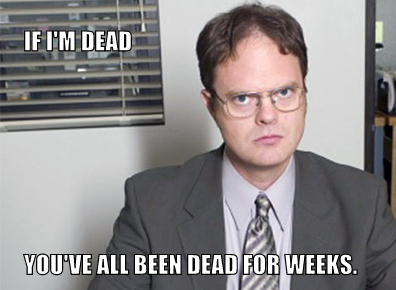 People all over the world have a lot to fear from the Walking Dead, but in reality, none more so than those with chronic illness. Fibromyalgia? Dead. Lupus? Dead. Heart Conditions? You’re going to die.

But take comfort in the fact that it’s probably better this way. I mean, imagine it. You’ve run out of medication, your pharmacist isn’t calling you back, your concierge doctor tries to eat your arm after putting an IV in it….It’s just not a world that’s meant for our kind.

In an era where bloody entrails line the streets, already mad with chaos—where infection ravages every blood-lined shelf at your local Publix, there is just no room for people who need to check their blood pressure every forty-five minutes. It’s just not a good fit.

I’ve obviously put a lot of thought into how to handle this and I’ve decided that we all just need to band together on this one. Be strong. Let your healthy loved ones move forward so that they might find their way to the CDC and be cured before it’s too late! We’ll hole up in a hospital somewhere; gather hazmat suits and ventilation masks. In a world full of healthy, robust individuals gaining more tender muscle by the hour—we’re a scant meal for an aimless school of walkers.

But alas, our time will come and we too will be gobbled up like the leftover dark meat the week after Thanksgiving.

It’s time to start making plans for the end of times. Talk to your doctor today about different medications and cyanide pills for a well-planned execution.

26 thoughts on “Chronic Illness and The Zombie Apocalypse: You’re Going to Die…First.”