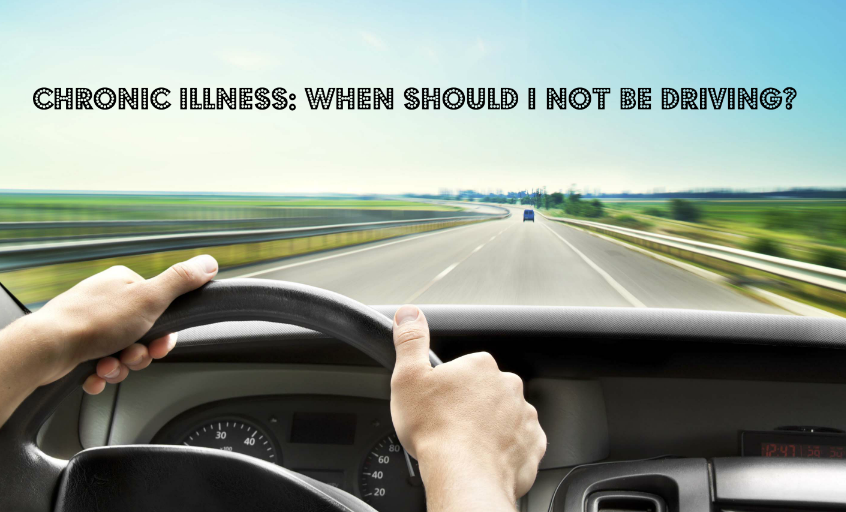 I’ve often found myself stranded at the mall or the grocery store or the infusion center and have had to call my mom or husband to pick me up. We don’t really have a robust Uber community in Boca Raton yet.

But I should know better. There are certainly a handful of times when your symptoms and the circumstances surrounding your chronic illness should not have you sitting behind the wheel.

Here are a few tips to keep in mind when you’re trying to figure out whether or not to ride or die. Because it might be both.

Oh, this one KILLS me. I obviously have extensive experience being on painkillers. And I don’t care how familiar you are with your body on narcotic medication you NEVER, EVER, EVER get behind the wheel. EVER. I can’t emphasis this enough. There is just no excuse.

(At least there was before, but now you know better now, right?)

Narcotics are a medication you have to work with. They’re there to help you heal and they do it by basically shutting your body and brain down. So follow through, lay down on the couch, and let the unbearable sleepiness roll over you.

Even if you feel like you’re not that far gone, take the extra precaution and don’t drive. There have been situations where I’ve gotten done doing a task, I get in my car, ready to bust my ass to get home and pass out because I’m in excruciating pain—but I do not take my painkillers until I get home. Why? Because you just never know! There could be an hour long traffic jam out of nowhere and halfway home you could be tripping the light fantastic. Bad.

2) Don’t drive to the emergency room.

If at all possible, don’t take yourself to the ER. While I know getting an ambulance is usually not preferable—at least try to get an uber, taxi, or a friend to drive you. I recommend going with a friend or family member who can act as your patient advocate. Why? Because one of three things is going to happen.

The first: They’re going to admit you to the hospital and you won’t want your car sitting around for a few days in the parking lot.

The second: They’re going to give you hella drugs and what was rule number one? Don’t drive on drugs.

The third: They’re going to do jackshit and you’re going to have to drive yourself home in pain and may not be able to concentrate (another reason you shouldn’t drive there.)

3) When there’s a possibility of getting really bad news.

If there’s a scan you’ve been called in to get the results of, if you’re about to have a major surgery, if you haven’t felt the baby kicking all day—don’t drive alone. Bring a support person. Driving in high anxiety or extreme depression puts you and others in danger. If you sense a possible blow, prepare for it.

There’s no shame in taking your recovery slowly. If you’ve just spent several days or weeks in the hospital, don’t rush to get behind the wheel. You’re still adjusting to getting back to your normal routine and you may underestimate the amount of energy and concentration it takes to man a vehicle. Ask a friend, get a ride—at least until you’re feeling a little more steady on your feet.

5) Don’t drive when you’re too tired.

I know this one seems obvious. Sleeping while driving is bad, duh. But let’s be honest, how many times have you gotten into your car, leaned your chair back and thought urgh, now I have to drive all the way home? If you’re feeling like your brain is shutting down or your eyes are fluttering shut—do yourself the ultimate favor and abstain from driving. Even if it’s just by taking a five minute nap in your backseat. You’ll thank yourself for the good judgement later.

When have you driven when you were definitely not supposed to?

33 thoughts on “Chronic Illness: When Should I NOT Be Driving?”