So come Saturday afternoon—I was climbing the walls. I’d been stuck, sick in the hotel for a few days and despite the fact that I was still riding the waves of nausea, I wanted the hell out.

So, Mom and I went down to the lobby  and had them call a cab for us to head down the street to the mall. We’d heard a lot about the Galleria mall here—and was pretty excited to do some shopping.

So when we saw the cab outside we were confused. First of all—it was a mini-van, not a cab, and there was two people in the cab—a driver and a girl.

When we got in, we noticed two things: the first was that the cab was a toasty 110 degrees on the inside. The second was this: 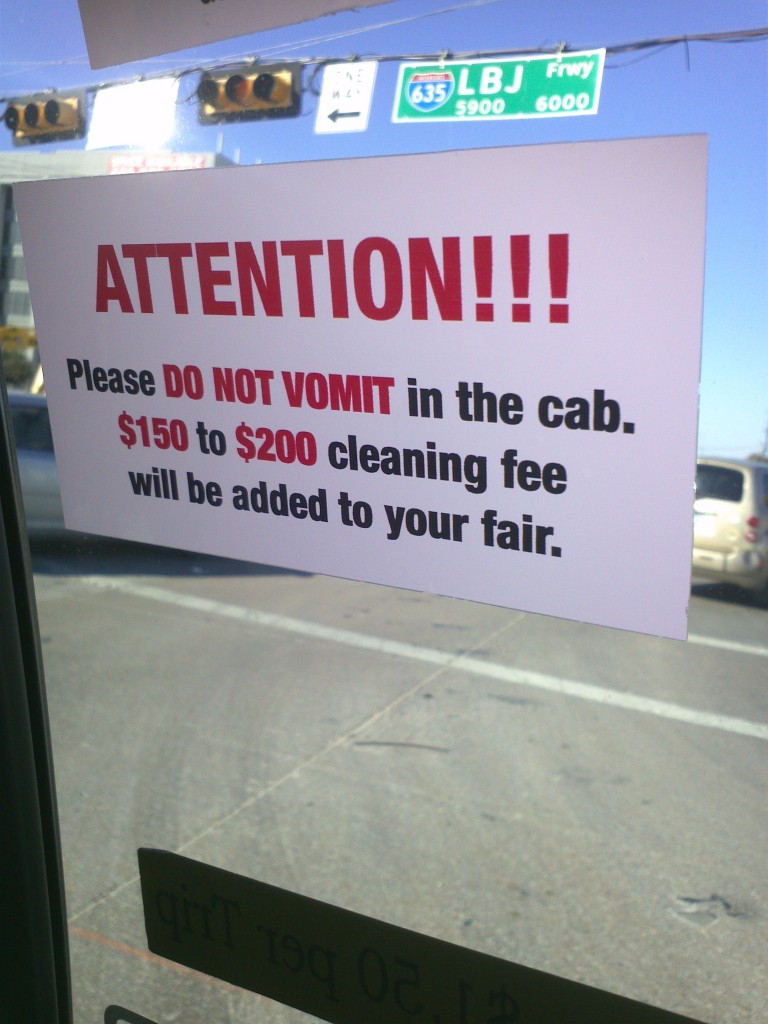 Now let me tell you—nothing freaks out a person with motion sickness more than a pre-emptive warning NOT to vomit. Why would someone tell you not to vomit unless the circumstances previously indicated some condition to induce vomiting?

After we told the driver where we were going, things took a turn for the worse—He got angry. He started screaming in another language. Slamming his fists on the steering wheel and peeling out of the Hotel’s parking lot and onto the freeway.

Now it’s not a long drive to the mall. Maybe a few miles, max. But the heat was getting to me.

“Can we turn on the air back here, please?” I asked.

Then he almost crashed into the concrete median on the highway, and the lady next to him grabbed the wheel.

Well, I thought. I’m definitely going to throw up in the cab now.

Thankfully, his woman companion started yelling at him to calm down, and she opened the cab window on my side.

After that he basically held us hostage in the car while driving around the mall two times to run up the fare.

24 thoughts on “Don’t Puke in the Cab—Easier Read Than Done.”