My grocery bill is astronomical.

Like if you saw how many times I went to Publix and how much I spent each time I went you would think: That girl has got to be morbidly, morbidly obese. No question.

But the truth is that my diet is just very unpredictable. It’s why R.J and I don’t bond very well over food. His diet looks like the following: 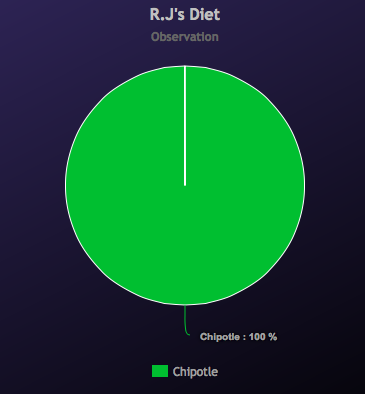 Pretty standard for a 26-year-old male of good health. 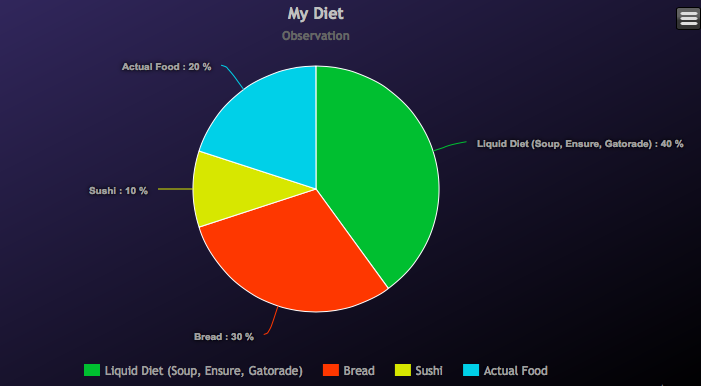 Living with gastroparesis is a continuos mindfuck. Is my stomach going to work today? Will I ever get off the toilet? Will a sandwich make an attempt on my life? I don’t have these answers. And neither do my doctors.

All I do know is that stress totally makes things worse. So my trip to DC (and the preceding weeks where I had non-stop migraines that I thought might never lift) created a real kick-in-the-gut feeling to linger 24-7. I tried to just eat whatever I felt comfortable enough with during the conference which, for some bizarre reason, was JUST steak. Even bread was making me feel a little sick. I can’t explain.

Then when I got back I think I just took a deep breath and let my entire body fall to pieces. It hurt to drink water, let alone bread or steak. It kind of felt like like a cross between being punched really hard in the stomach, and having road rash on the insides of my intestines.

So I started to do an Ensure diet, but the Ensure kept roiling up in my stomach like spoiled milk. Back to Gatorade. After a few days of basically starving I decided to try sticking some soup in my Ninja blender. That felt fine. I alternated between pureed soup and toasted bread with oregano flakes. This went on for about a week. I even had my mom puree chicken soup from the Kosher market for me when I came for Shabbot on Friday night. 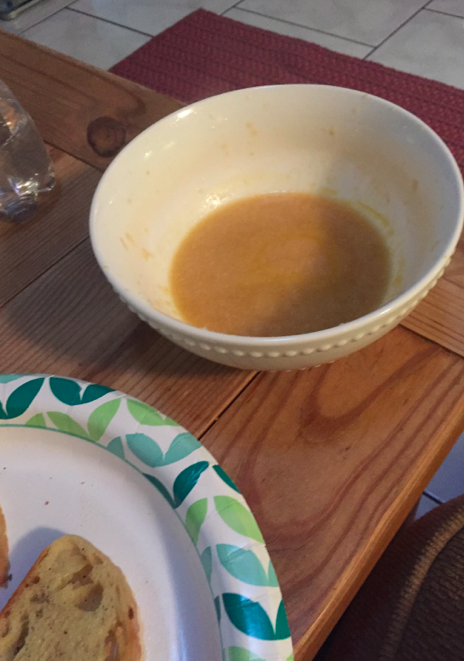 I started to expand my bread diet to include multiple varieties of bread, but scaled back when a bagel made me hit a wall.

After a few more days my confidence started to build back up with pureed soups. I decided shit needed to get serious, so I bought a Magic Bullet (The blendering kind, not the…other kind.) 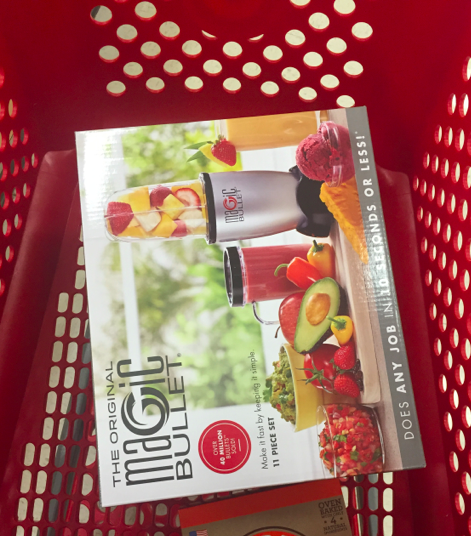 So I tried to puree some other things. Like rice. This was some greek rice with peas, carrots and Tsazki sauce. (Yeah, the sauce was probably a dumb idea, but it made it blend much easier.) 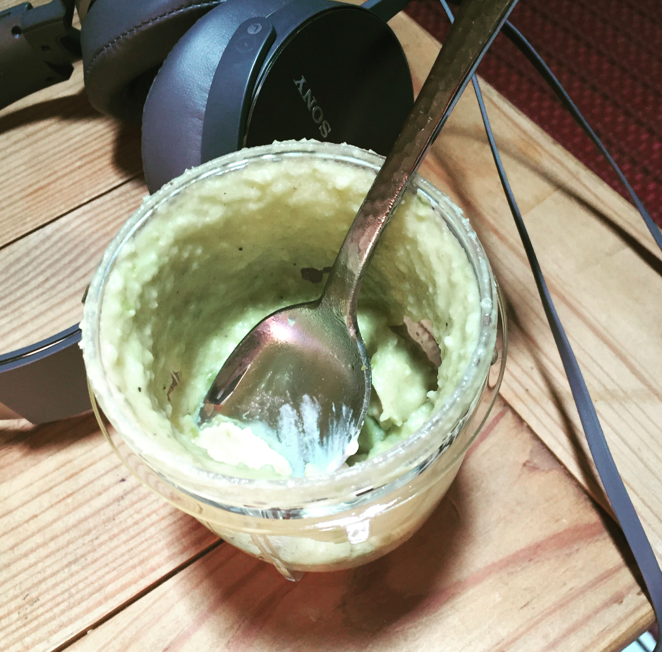 What else can I blend!?

Let’s try some meat and potatoes! 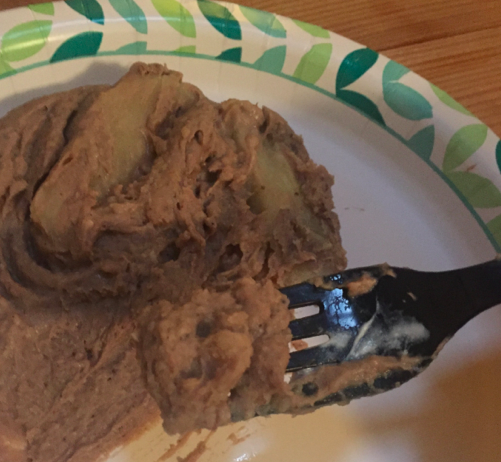 Oh my god. I’m sorry you had to see that. I’m sorry I actually ate that. But really it was a lot better tasting then it looked.

Here was a Lean Cuisine Pasta Marsala which was delicious and fine with my stomach. 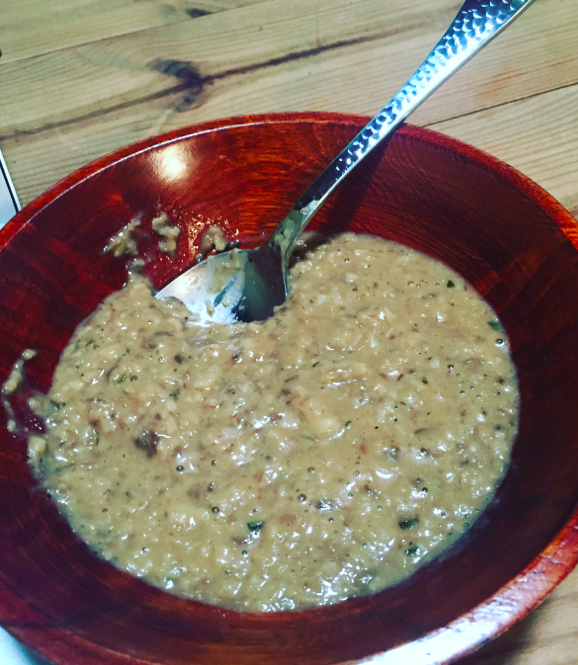 My stomach was starting to feel much better at this point, but with the smaller portions giving me so much more control and the fact that eating just….well, it just hurt less in general. This was a night I was craving tacos. Ground beef (really, really ground) and spanish rice. 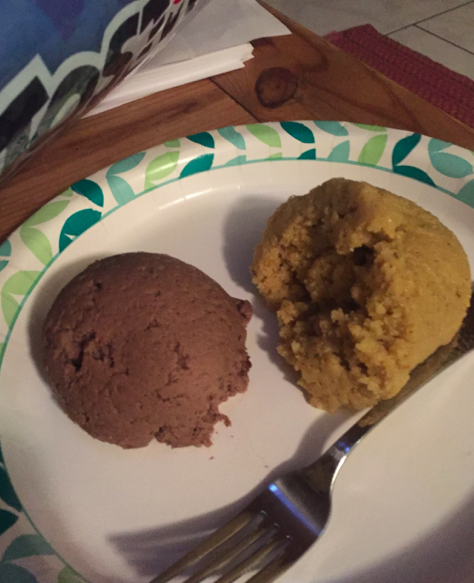 Still, I had to have some of my favorite bland real food. Here is some Mexican chicken soup from Senor Burritos: 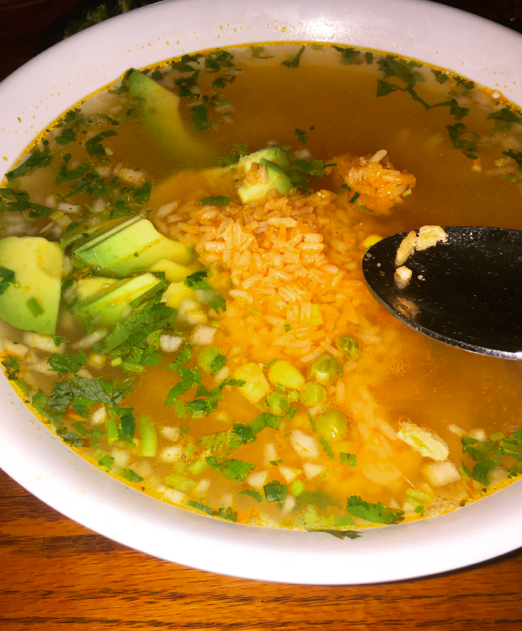 Some things just didn’t blend well. Pasta was probably the hardest to get right. It often came out really gummy and dry. Oil or butter helped with that. Here’s some salmon filet and pasta shells with butter that I had for Shabbot the next Friday at my parents. 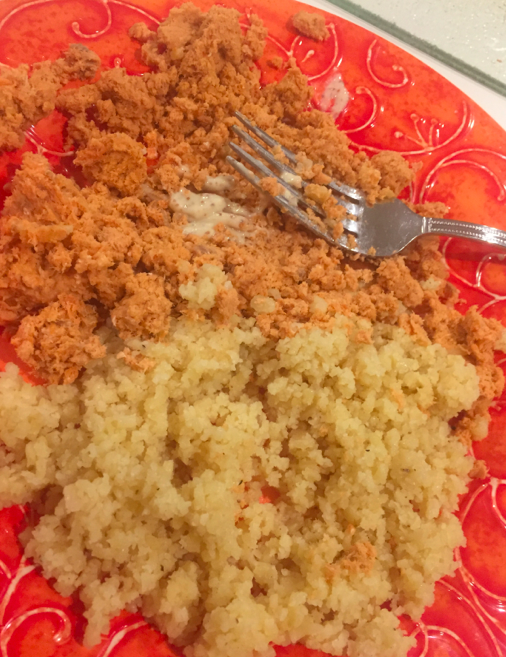 After that night I thought: well, pasta, salmon—these are pretty “whole” foods no matter how much you blend them. I decided to test the waters with a plain turkey sub from Publix. I felt fine after. So I had a chicken sandwich the next day, and then R.J and I went out for Italian (a real date night after several weeks of him working graveyard shift). I ordered a pasta dish with crabmeat, sundried tomatoes and a pesto sauce. The tomatoes kind of concerned me. (Too much acid?) But I got braver as I started to eat. After all, everything has been going fine so far that weekend.

And then I felt it. All three meals hit me at once the next afternoon and I was in a world of pain. I felt so stupid! Why did I think I could go from pureed food to whole food so quickly? And sun dried tomatoes? SUN DRIED TOMATOES?

Anyways. Since then it’s just been a mess of confusion. I’ve mostly focused on eating carbs, meats and Ensure.

I’ve been drinking a shake every morning with ice, a quarter of a bannana and a bottle of regular Ensure.

For lunch I might try to eat a very plain sandwich. And if I’m not crying by dinnertime, I’m aiming for pasta, potatoes, or something else white and bland.

I finally (maybe two hours ago) thought: huh. Maybe I should get some help with this and scheduled an emergency GI appointment tomorrow. It’s only an emergency now because I needed a painkiller to digest my Ensure this morning and I’m still curled up in a ball wanting to extract my own organs.

So…What are you having for dinner?

August 4, 2016
Advice ChronicIllness 13 comments admin
← 2016 Dysautonomia International Conference: Meeting Everyone Who Ever Had POTS (Part 2) The Young & Infected: A Soap Opera. Chapter 1: You Give Me Fever →