(DISCLAIMER: This isn’t a teaching tutorial on how to give yourself human plasma. You should see a nurse for that. Even a bad nurse versus this blog post. Because I’m not even a little bit qualified to give real medical advice.)

The first time I did Sub-Q IG, I was terrified. I’m talking, palm sweating, hallway pacing—terrified. And who wouldn’t be? Everything I’d read/seen/been told about Sub-Q IG seemed horrible. I mean an hour long session? Not one, not two, but THREE needles—that would go in my stomach? And I’m supposed to do this all by myself?

Of course, by the time I was set to start Sub-Q I was a walking petri dish. I had a sinus infection that wouldn’t go away for a year, even after surgery and a cut on my leg had just turned two other cuts on my leg into a staph infection. The whole thing was gross. And awful. And needed to be dealt with.

So after much hemming and hawing by my insurance company, my treatment was approved and I had a nurse scheduled to come and show me how to inject myself.

She could only come in the middle of the day, and I remembered this because I remember my mom not being able to come because of work. But that was okay—I didn’t need my mommy to get some shots…for an hour…in my stomach….

I just needed three or four girlfriends for moral support. I was a little nervous asking them to come by, but technically I was supposed to have someone there to learn the technique in case I forgot anything. And silly as I felt, my fear in general about the whole situation overpowered my embarrassment.

I had a lot of questions when the nurse came, like: if these needles are in my stomach—won’t they hurt if I move around? Am I supposed to stay still for the whole hour so they don’t puncture my intestines or something? Where is the medicine going to go? If Sub-Q Immunoglobulins are plasma—will the medicine be red like blood?

And will this hurt?

Here’s what I learned: The needles do go in your stomach ( or other –ahem–fatty areas.) But they’re tiny needles, and if you wiggle around, they’ll just wiggle with you. They don’t go far in enough to actually puncture anything but skin and fat. The medicine will sort of puff, or bubble out underneath your skin where it’ll slowly sink in overnight. Neither IVIG or Sub-Q immunoglobulins are red like blood, they’re like a clear thick gel. And does it hurt—well, if you do it wrong—yes, yes it does.

She showed me how to set up the pump correctly, but forgot to teach me how to get the air out of the lines, meaning I’d get a good punch of pain as soon as the pump started. She was also in a hurry so we didn’t keep the lidocaine cream on for as long as we should have, so I felt the needles go into my skin (and felt them anytime I moved after that.) Eventually, I did get a second nurse in to teach me the right way—but she accidently pricked her hand on the last set of needles I had and my trust kind of went downhill from there.

Eventually, after that—I did learn how to do it correctly—and here’s a little step-by-step on the process.

First off: Sub-Q is a bunch of little pieces. I decided to organize mine with a plastic hanging shoe rack. 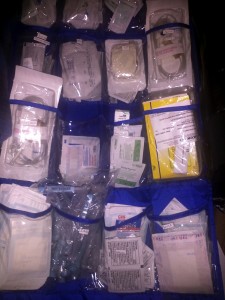 This is all the crap you’ll need, including your pump, tubing, bandages, numbing cream, alcohol swabs, gauze, plastic needle… 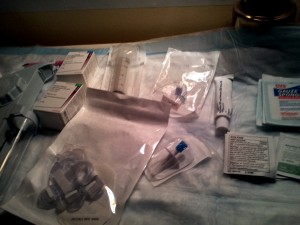 Look at all that stuff!

This is the Freedom 60 Pump. Freedom. Because it represents ‘Merica! No. Not really. I do like that it doesn’t use any power to work. So it’ll work during a hurricane. Or a nuclear fallout. 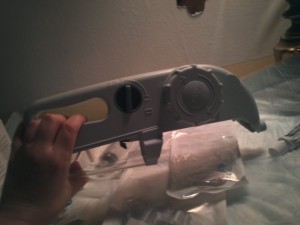 Step 1: Choose an area on either your thighs or stomach. Take a a swab. Swab it. Draw a small circle in each area. Put some numbing cream on it. Slap a band-aid on it for fifteen minutes. 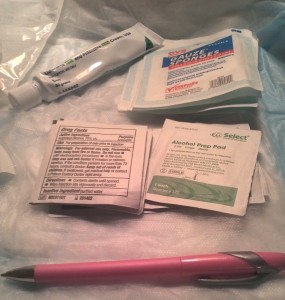 Step 2: H’okay. All numb? Good. Pull those bottles out of the fridge and pop the caps. 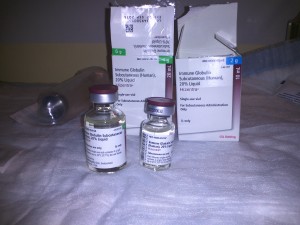 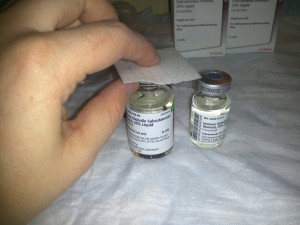 Step 3: Then put this thing in it. 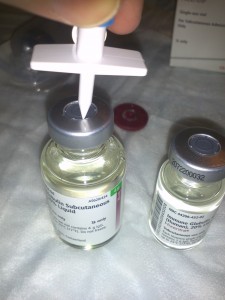 Step 4: Connect it to your syringe. 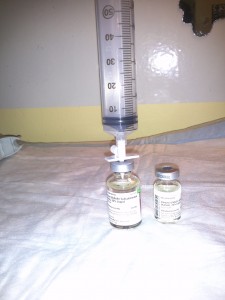 Step 5: Slap it against the counter until all the air bubbles come out. Then connect the tubing. Protip: PUMP OUT THE AIR BEFORE YOU STICK YOURSELF WITH THE NEEDLES. 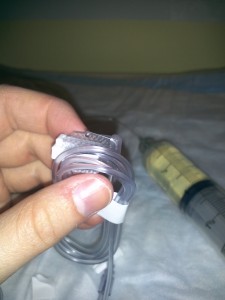 Step 6: Remove the bandages, wipe skin with alcohol pads, insert needles within the circle you drew. Then use bandages to stick the needles in place.

PICTURE NOT HERE (Because it would be me pinching fat areas, and inserting needles into them. And do you really need to see that? Even for scientific purposes?) 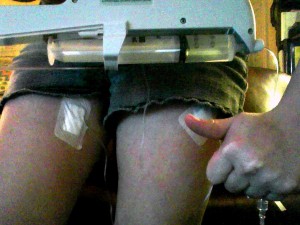 So what’s my experience like with Sub-Q now that I actually know what I’m doing? Well, it’s not like a party, but it is painless and not a huge bother. Hizentra has made a HUGE difference in my life. I used to be on antibiotics non-stop. For years. Constantly had colds, flus, and sinus infections. Today my primary immunodeficiency symptoms are much better and so am I! It’s probably been one of the best choices I’ve made in my treatment so far.

Despite the bother and the learning curve, I would recommend this treatment to any PIDD patient (or any patient just suffering from continuous, multiple infections.)

On the subject of POTS and Hizentra: I didn’t start taking Hizentra for the POTS, that I was diagnosed with only a few months ago. There have been a few patients I’ve spoken with who are on Sub-Q or IVIG therapies for POTS and have shown an improvement in symptoms. All I can say is that the day following my treatment my fatigue, BP and pulse are much worse–but the rest of the week they are much better. I wish I could give more insight on its effects for POTS patients, but I honestly just don’t have clarity on it and neither do my doctors. If you’re a POTS patient and think it might help, talk to your doctor about it and seek their expertise!

36 thoughts on “Hizentra, Gammaguard? What is a Subcutaneous (Sub-Q) Treatment for PIDD Like? My Story.”