On sunday night I was putting away laundry when I felt something sharp in my chest and I felt like all the air had been punched right out of my lungs. Never a good way to end the weekend, right?

I dropped my hangers in my hands and sat down on our bed. I put a hand over my port. It had already been a rough week with the port because it was inserted about 1cm to the left of where it usually is. It’s annoying, but it has to be done when you’re accessed 24/7 to give the site some time to heal.

But this pain was new and enough to get my attention. I went in the bathroom pulled off the bandage to check the damage. It didn’t look great, with blood around the needle and soreness everywhere I touched.

I have gone exactly one year (to that week!) since getting the port placed. And so far I’ve never had any signs of an infection.

I called my doctor and he said to leave it in until I saw him in the morning. So Monday I came in for my 11AM appointment and he pulled it out. It looked bad, so he gave me a shot of Rocephin (a super strong injectable antibiotic) and a script for ten days of Amoxicillin. He also swabbed and sent the sample off to a lab. Since I didn’t have a fever, chills, and the pain didn’t seem to be getting worse he didn’t feel like we needed to jump straight to IV antibiotics and hospitalization.

So I went home, one port less than I’d come in with. 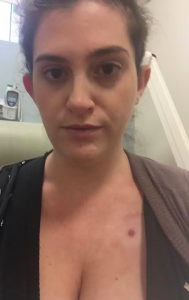 VA-DAMN check out that sexy clavicle

“Give it a few days to heal and let’s see what the culture says,” said my doctor. Which seemed like really logical advice until it was put into action. “Just take it easy.”

Funny thing is, for me, taking it easy means not doing anything where I might sweat or simply make my heart race.

So here’s what I did: laundry, grocery shopping, went up and down my own staircase, walked the dog in the afternoon sun and–without shock or surprise to anyone, in three days I was so incoherent and exhausted I ended up having to go to the Urgent Clinic to get an old-fashioned IV.

The anxiety that set in about having to explain my disease to a UC doctor really set in. My mom came with me and helped me explain and there wasn’t an issue, he signed the orders and sent a nurse in to do the IV.

Because of the port–it’s been almost a year now that I haven’t had to have an IV. (Pretty exciting stuff when I think about it.) Getting one didn’t hurt, but realizing the nurse didn’t really know how to give one wasn’t reassuring. He managed to get the vein, but didn’t remember to shut the line. This resulted in me sitting in a puddle of my own blood on the exam table.

Two days later I was in the ER until two in the morning getting more fluids (and nausea medication.) 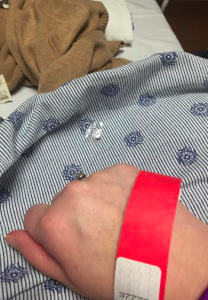 You know the drill. Bra off, paper-thin, extremely uncomfortable gown on. 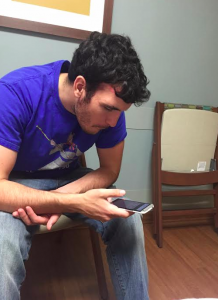 My husband was THRILLED about staying until like 1-2 in the morning to wait for blood results we never got.

Finally, on Friday I begged and pleaded for the port to be re-accessed. It didn’t seem to ever have even been an infection at this point. It was probably just irritated from the weird placement. My wish was at last granted and my port was once again accessed. 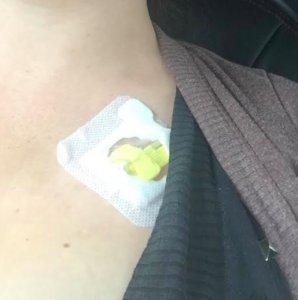 Thank you. Oh, lord, THANK YOU.

Things like this make me want to never mention any possible glitches in my treatment.

With Immune Deficiency, if you ignore an infection for like a MINUTE (okay, that’s an exaggeration, but overnight or a few hours is not) that infection spreads or worsens. It’s like a thing you just don’t mess around with.

But as I get older and my disease becomes more complicated, my ability to differentiate a minor issue from a major issue gets a little blurred sometimes. My concern can set off a physicians concern and while it’s the smart thing to do, to stay for observation or take no second chances: god, can I tell you that it REALLY sucks sometimes.

February 12, 2016
ChronicIllness 12 comments admin
← What I Want The Strangers Who Ask Me About my Port To Know 9 Times out of 10: I Am Probably Crying Because I Want a Bagel →