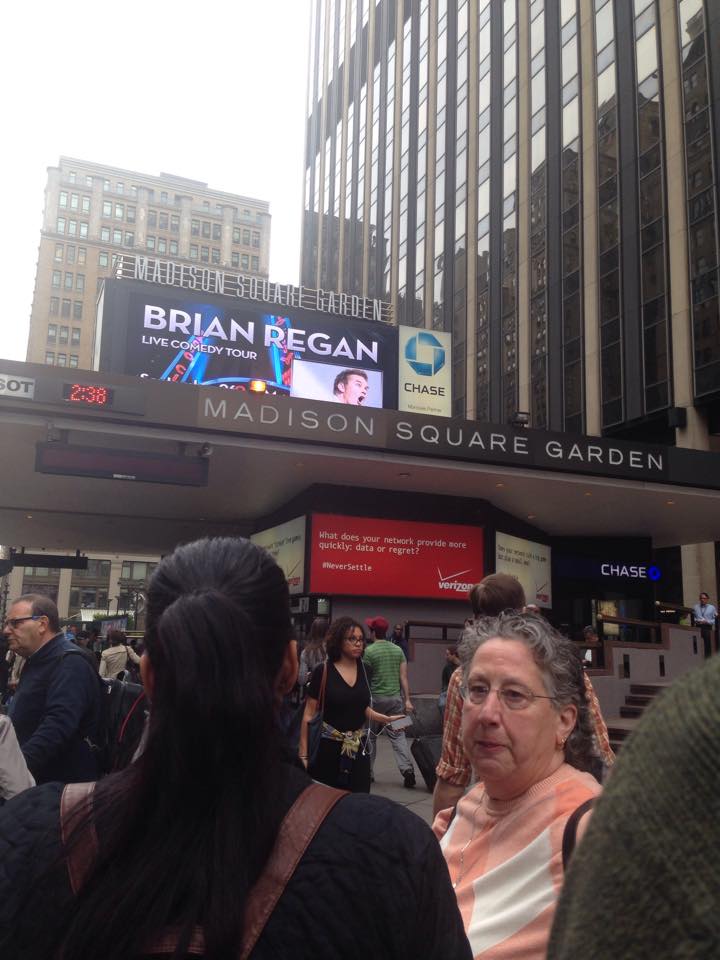 How can I describe what being in New York City is like with dysautonomia?

So if, like, your average Tuesday in Boca Raton is the news leaking out about Rebel Wilson using a stage name–New York City on a Saturday is like discovering one of the Duggar children is a pedophile. Two very different modes of freak-out. Not completely unexpected–just a little too stimulating for the body to properly handle without medication.

The flights there and back were probably the easiest parts for me to handle. Stepping off the plane and into baggage claim was my deep breath before being totally sunk underwater. The good news is that instead of staying at a hotel (and dealing with the ensuing cab, directions, and ridiculous price tag of a hotel) we were staying with R.J’s Aunt, Uncle and Cousins–who, have I ever mentioned that I LOVE? We stayed there last time we were in NY (just for a weekend) and had the best time hanging out with them. So I felt really good about knowing I could go into the city during the day and come back to somewhere comfortable and homey at night. In fact, our nights were incredibly peaceful eating take-out and playing cards in their kitchen.

They live in Rockville Center, about thirty minutes by train outside of the city. In the morning, his Aunt dropped us off at the train station and off we went exploring…

Our plans were nothing if not ambitious. We wanted to see everything: Central Park, The Natural History Museum, The Met, NBC, the financial district, Broadway, Time Square– And so I knew, on some level, that this was going to be a marathon for a few days. And my plan was to just push through the fatigue and any other symptoms that got in my way–eat VERY careful to avoid taking any blood away from my brain to help digest–and to drink strategically as often as possible while still in a zone where I knew where a public bathroom might be. Ambbbittiousss. 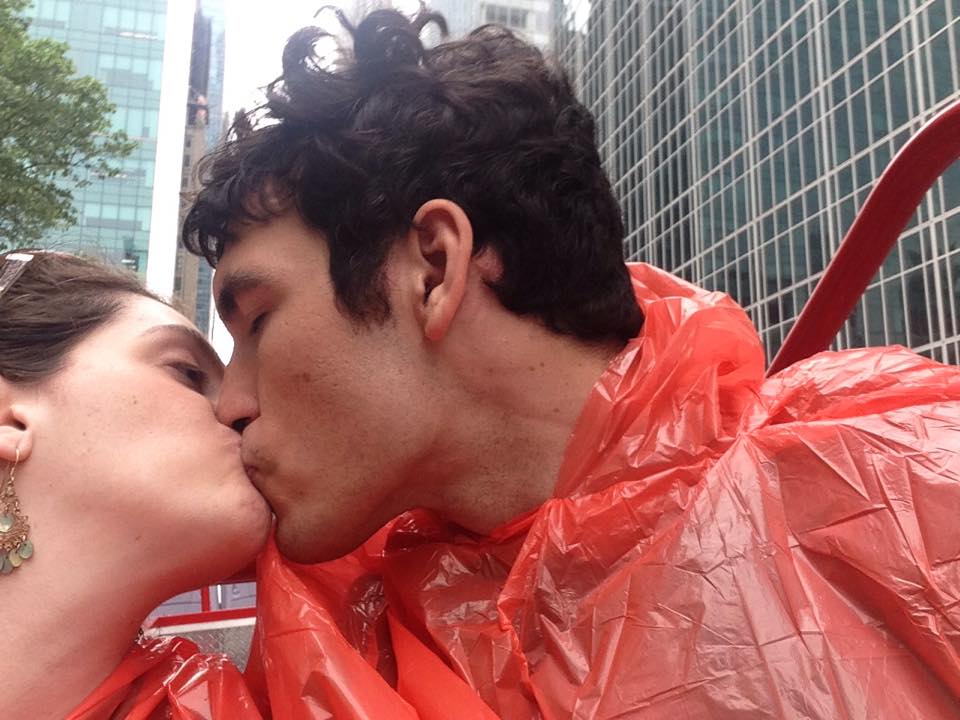 We were on a double-decker bus…in the rain. Free ponchos!

First we catapulted out of Penn Station and into the streets. Even in the mid-morning the lights of advertisements and big buildings were blinding. We emerged in front of Madison Square Garden where a big Ranger’s game was about to take place. There were miles of blue jerseys everywhere we went.

We caught two food festivals happening on that same afternoon. I stopped into a boutique to try on some clothes, we even got tickets for a double-decker tour bus that took us (briefly) around some parts of the city before we got off again on foot. It was a long day of walking, and even though I was happy to be out and seeing the sights–the walking got to me after a few hours and I was ready to call it a day.

This was maybe at 2:30. We tried to find our way back to the train station but kept getting wrong directions. We walked and walked and finally found ourselves outside of the Empire State Building–which I had no idea about whether it was close to or in the opposite direction of Penn Station–all I knew was that I had to rest or risk passing out. We sat down on the steps of the building and quickly got shoo’d away by a security guard. We kept walking. I don’t think we actually made it onto the train until 4:30–by which time I had already had a brief meltdown.

New York City is not built for the chronically ill tourist. And I had no delusions about that going into this. I remember the last time I was there and trying to find a public bathroom took hours–and when we finally did the line was wrapped around the building.I knew that my motion sickness was going to be a problem on trains, elevators, taxis, busses and subways. If there had been a waiver to sign before stepping off the platform I would have already committed to and signed it. 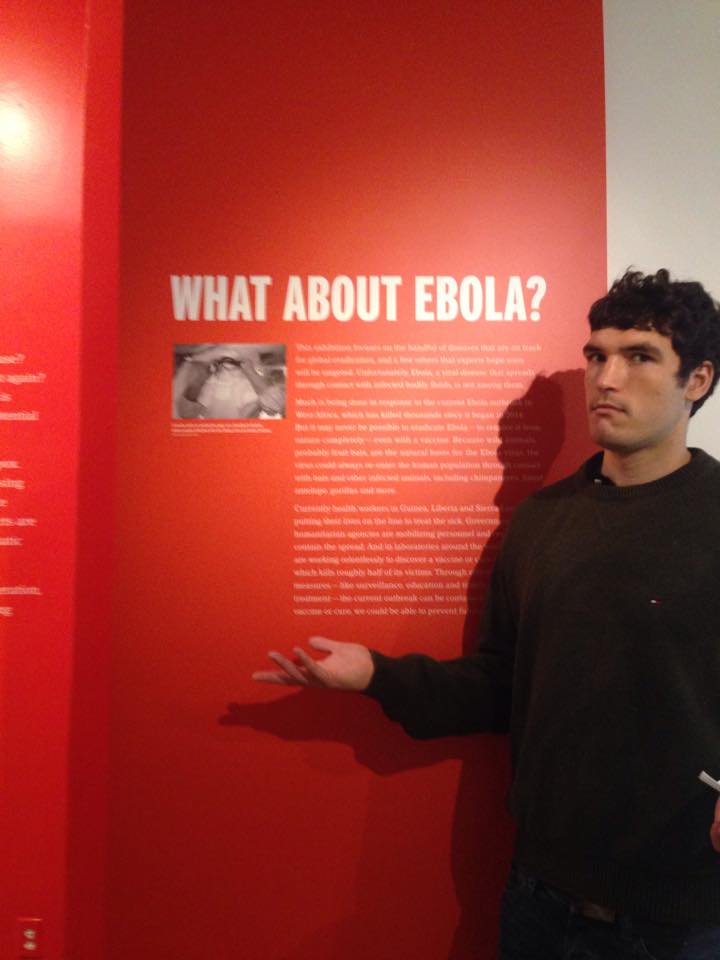 I don’t have time to discuss this right now.

That didn’t make the reality of it easier–but I think there are some situations where you have to go into it being very determined that something is more important than how uncomfortable you might feel. And I had that. For me, this trip was about pushing through the anxiety of travel. Because it’s not something I have the luxury of fearing. Not just because it limits me, but but because it limits R.J. I want to be able to travel with my husband when the time comes. I don’t want us to have to compromise on our honeymoon or any other adventures we want to have, because I’m scared about getting sick.

I tried to ready myself and prepare for the idea that I might not be having a “good day” when the trip came.

For the week before we left I stuck to a bland diet.

For the plane ride over I chose a combination of pills that would make me relax, but not be comatose getting off the plane.

For the day trips I took water, gatorade, Altoids (for nausea) tons of extra meds I might need, disposable heat packs in case my stomach did start roiling, and lots of cash in case we needed to grab a taxi. (Which we SHOULD have done, but didn’t that first day.) Lesson learned.

I also did one IV in the morning before we left, and another at night when we got back to the house.

And R.J was prepared too.

When the walking became too much, he carried my purse (which with the fluids can get heavy). He made sure to stay in pace with me so that I didn’t get left behind. He tried to be as accommodating as possible in getting us to and from places. And once my meltdown hit, he took the lead and got me out of the situation as quickly as he could.

You know–In my head, traveling with him didn’t seem like it would all go so smoothly. But going into the ninth year of our relationship, I think it’s safe to say that R.J both “gets it” and knows how to respond to it. And after that first day getting back to Penn Station–what did I really have to worry about? R.J was right there with me.

It got easier the next day. We met up with our friend, Jordan, at the train station and he took us through the subway (my first time being on the subway) and OH MAN was I not a fan. I was lucky enough to get a seat, but I didn’t get the memo about how fast the subway goes and slammed myself into the metal bar the second the train whooshed into motion. The subway was also a lot more crowded and a lot more uncomfortable than the train had been.

But we were feeling better about being in the city with someone who actually lived there and Jordan took us through the museum, brunch and Central Park in the span of an afternoon. We were covering a lot of ground. 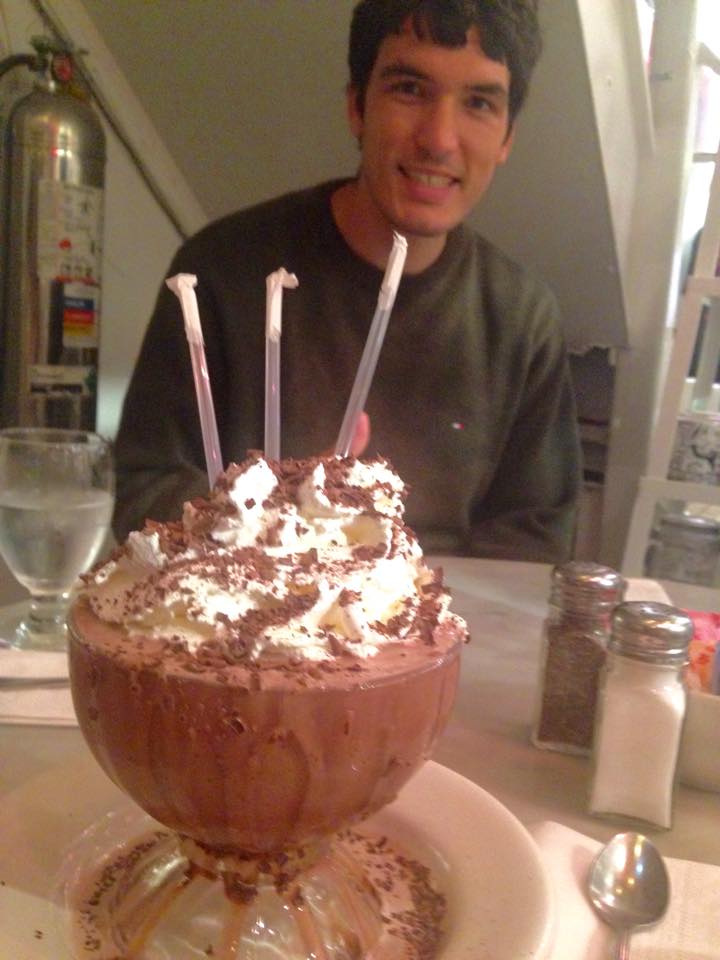 I snuck a sip of this–don’t know who I was sneaking from, I’m pretty sure my stomach found out.

On our last day we took his cousin, Jessica, with us. We had lunch at Lombardi’s Pizza and met up with one of my best friend’s since childhood, Ally. She was in the area on a modeling job (because she’s a model, did I mention? Like an 8-page-spread in British Vogue this month model) which was so much fun. 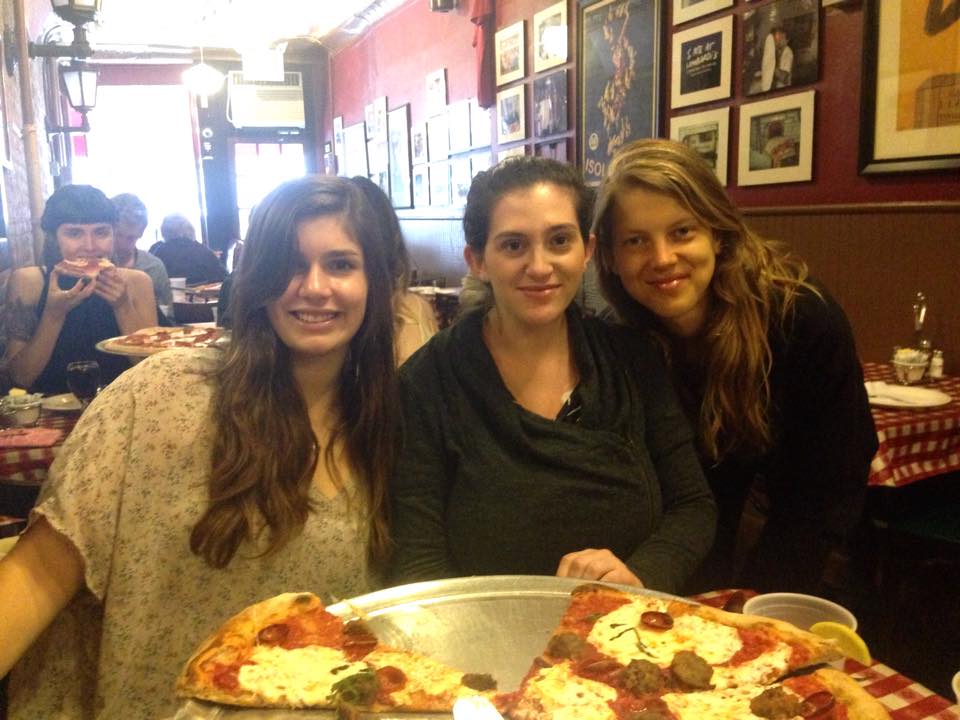 Ally walked us out to find a taxi and then Jessica, he and I all headed off to Serendipity. I had wanted to go there since I saw it in that movie (Serendipity) to try one of their frozen hot chocolates.

But despite the fact that I couldn’t actually have one, it was still a great time. I also spent a ridiculous amount of money at Dylan’s Candy Bar. I got a little bit sick in the train on the way back to Rockville. Just a lot of potholes while we were in the cab, and then we bolted for the train because there was so many people in the station since it was rush hour on a Monday. I emptied out one of my bags of candy into another bag just in case I needed to puke, but I managed to keep it together long enough for us to get back home and the nausea dissipated after a few minutes of being on solid ground again.

The flight back went about as smoothly as it could have gone.

I don’t want to give anyone the wrong idea here.

I couldn’t do this every day. I don’t think anyone with a chronic illness could really, continuously expend that amount of energy day after day. Three days was beyond my limit and I’m not surprised when I got home and found myself sick, weak and back on that bland diet. But I’m really glad I could do it!

It makes me feel a lot less anxious when I think about traveling in the future, or having to be “on” for a day–like for my wedding day.

I lived, you know?

By the way, what’s the deal with New York bathrooms? They’re like a fourth of a normal Florida bathroom. Is this just a fat-shaming thing or a tall-shaming thing? Or just a see how flexible you can be while squatting in a room that looks like it’s about to close in on you thing?

May 25, 2015
ChronicIllness 27 comments admin
← Traveling with Dysautonomia Part 1: Flying to New York and Back Video Update: A Port, A Wedding, And the Botox →

27 thoughts on “New York City & Dysautonomia: Subways, Serendipity and Sucking It Up”