A couple of months back, on my way home from the emergency room, I had second concurrent emergency.

My mom was driving me back to my apartment, and as she parked—I saw a firefly. At least, I thought it was a firefly-having seen one, once, about ten years ago, in North Carolina. Florida doesn’t actually have fireflies as far as I know. Anyways, I thought I saw one buzzing around the car and I started swatting at it like crazy.

“The giant, glowing bug bouncing all over the car….THAT bug!”

Whatever, I think and get out of the car. Except something was wrong. Suddenly, all the lights on the street were very bright. The lit windows, the street lights…and they all seemed to be moving like this… 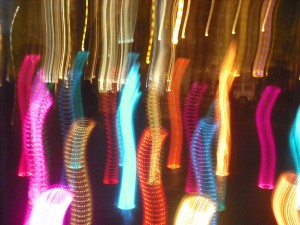 It felt for a minute like I had vertigo again, but only when I was near the lights. I started making my way to my apartment when I looked down at my hand and it looked like this…. 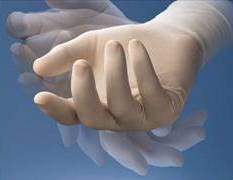 So, that had never happened before. Well, we hopped right back in the car and went to the emergency room—where after a quick test to make sure my retina hadn’t detached, I was told that I was having an ocular migraine.

“But my head doesn’t hurt…” I argued.

Ever since that night I’ve been having an issue with going from dark-to-light. I’ll see flickering lights, waving lights—but the worst is when I’m driving at night. I’ve made it a priority to not drive at night over the past few weeks, but in some situations it couldn’t be avoided.

Last night R.J and I went to grab something to eat and as I was driving it seemed like the lights were literally exploding from all directions. Street lights, red lights, green lights, brake lights…

It got to the point where I had to pull over so we could switch places. And it’s all kind of opened me up to the reality that driving at night is a really bad idea. At least when my heart medication isn’t working (which this week, it’s just not.)

It puts me in a really weird position. Because I like to drive for a reason: that reason being that my unpredictable health means I very often have to leave at the drop of a hat. And how great that I don’t have to inconvenience anybody else because I can just drive myself home.

So the idea of not driving at night anymore means that I can’t go out if I’m only feeling “so-so” symptom wise, because unless I feel GREAT and like my symptoms won’t put me on overload, I won’t know if I’ll be able to stay until whoever I’m driving with wants to stay. And considering the fact that I put my mom and R.J through hell with 3AM trips to the ER, endless doctor appointments in the middle of their work schedules, etc. I try to be as considerate as possible whenever I actually can.

So, I’m home tonight. And my perfectly functioning car with half a tank of gas is waiting outside for me. Until morning.

I’m trying to think of a solution to this one. I’ve sworn off taxis since I last had to take one a few weeks ago to get an IV at my doctor’s office. The taxi driver was such a tool. He drove like a maniac and spent the entire ride looking for something under his seat. And it was like $20 to go down the street. Like…LITERALLY. Not a good use of my limited and fleeting savings.

I’m hoping that these ocular migraines are just a response to this hiccup we’re having with my heart medicine—which I developed a tolerance to after a few weeks. My cardiologist started me on a new medication this morning called Mestinon. My internist knows another POTS patient who is doing outstandingly well on it, so hopefully this is the solution!

In the meantime, I may need to be a lady who lunches—and spends her evening watching The Office reruns with her poodle.

39 thoughts on “Ocular Migraines and Driving at Night”