I’m working my way through Captain Tom Bunn’s self-help book, SOAR. It uses an interesting blend of education and logic to help readers overcome their fear of flying. So far, much of the book has discussed the idea that fear–a release of stress hormones–can be controlled by letting the brain know that there is a plan of action, and a commitment to action–that action not always being to escape. Even if the commitment to action is simply saying to yourself, “I plan on getting off this plane as soon as the plane lands,” it’s enough to stop the surge of stress hormones–as long as there is a real and firm commitment to that plan of action.

And I like that. Because I’m a plan of action kind of girl. It’s the whole reason I’m reading the book in the first place. I’m planning on not letting the ass-hatery of claustrophobia stop me from visiting my sister in Seattle or business in New York. I’m planning on not spending my honeymoon on a four hour car ride to Orlando.

This week my plan was to throw a 4th of July potluck party, put together the POTS support group, and to do it all–despite the fact that my gastroparesis had been so bad–and in combination with both an ear and sinus infection–I was so dehydrated–I was pretty much in a state of delirium all week. (But really–when am I ever NOT in a state of delirium?)

So I promised not to overload myself the day of the party and instead worked a solid two hours in the morning, then went to Ross to buy pillows (what? we couldn’t have a potluck in our living room without red satin pillows–the room was incomplete) and then quickly put together the sloppy joes, yellow rice and tater tots. Giving me plenty of time to sleep for forty-five minutes before our friends showed up. 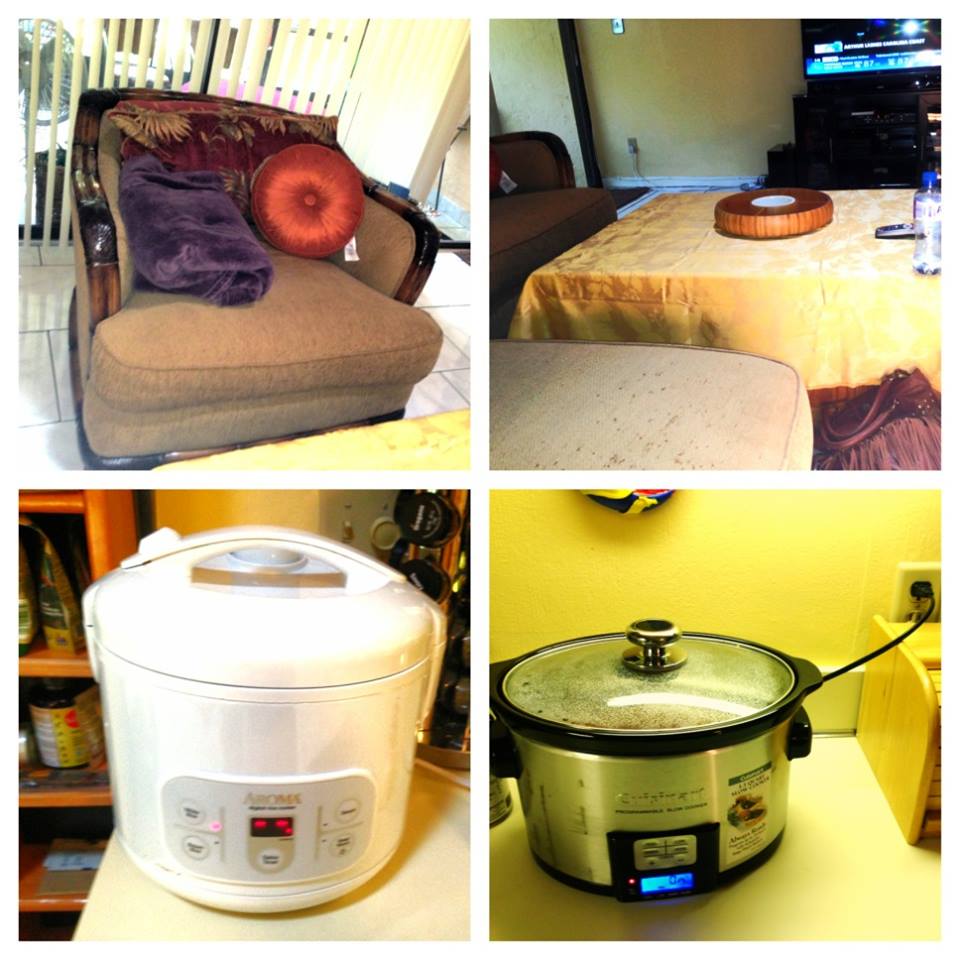 I also cleaned in-between some of that.

The party went great and I carelessly ate my weight in …well, pretty much everything because I have no self-control now that I can eat dairy and chocolate. 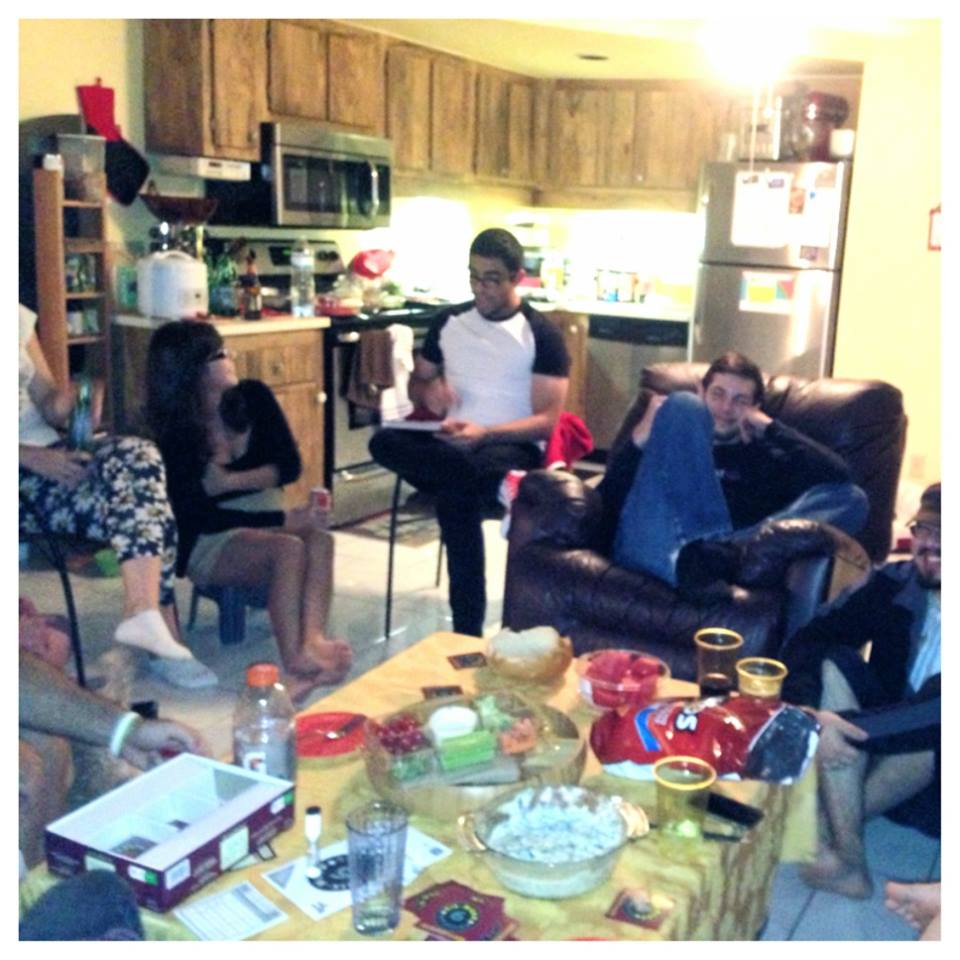 The next morning R.J and I got up bright and early so I could hit Kinkos to print out some materials for the POTS support group at Boca Regional. Dr. Santa Maria and I had been planning it for about a month now and by the morning of I had twenty-four people RSVP’d. It was by and far our largest group! 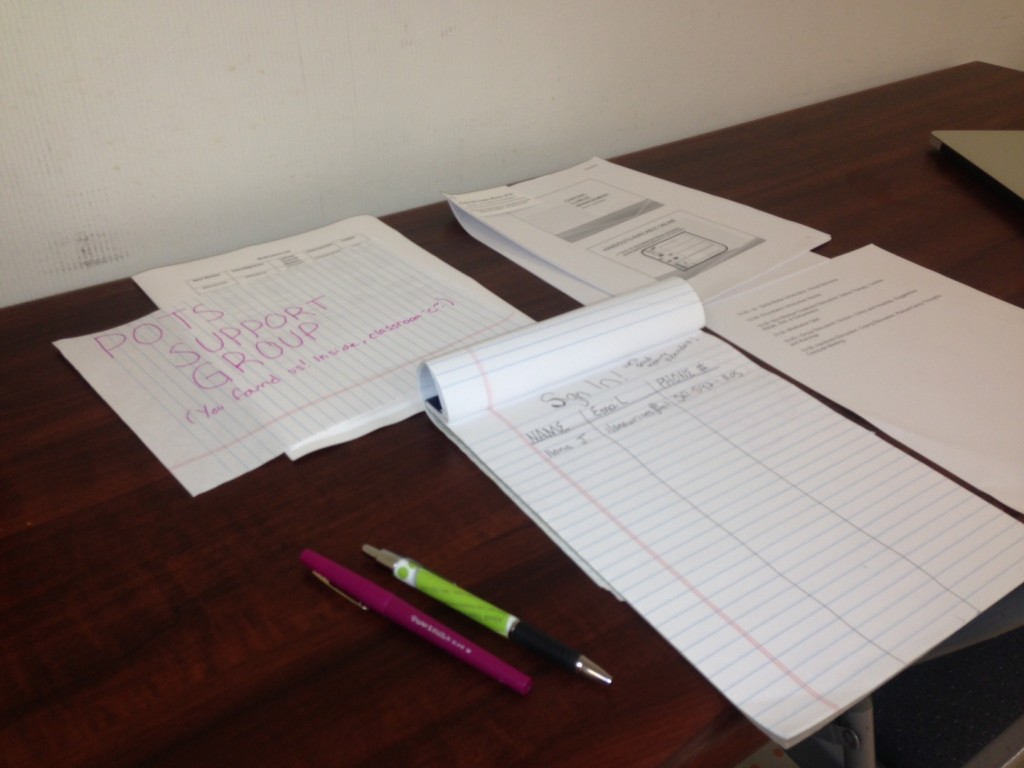 People began flooding in around 10:00 and by 10:15 we were bringing in chairs from some of the other rooms. I know we’ve broadcasted some of the groups in the past but since we had so many technical difficulties in the past–and because we wanted some of the new patients to have a chance to express themselves off-camera, we decided to keep it more of a closed group this time. (No worries though–we’re planning to broadcast another webinar of just POTS Q&A next month.)

There were so many reasons that this was my favorite group so far. The fact that we had three patients under 21–a 20 year old guy, and two 14-year-old girls with recent diagnoses–the fact their parents came to support them. The fact that many of our other patients brought parents or partners….

Being able to shed a little light on what some of the newly diagnosed had to look forward to–better treatments, new medications, saline therapy, etc. And being able to give the some resources to kick-off their planning really made me feel like…I’m definitely in the right place. 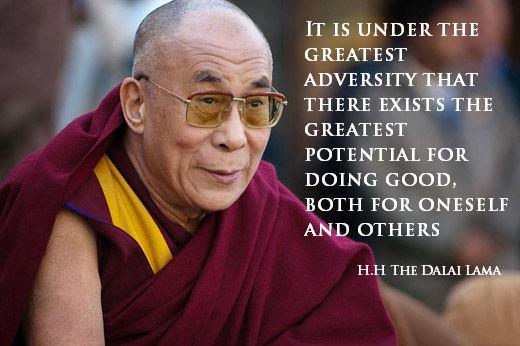 What I’m doing–between working with Dr. Santa Maria and Global Genes and connecting with patients through this blog–I know that I’m right where I’m supposed to be. I was looking at the two 14-year-olds at the meeting and thinking–damn, that was me. And I had no clue what was down the road, no clue how to handle any of it.

These girls are in a support group–with the support of their families–already starting treatment? So ahead of the game. I like the idea that I can be a part of something that could prevent other teens with chronic illness from going through all of the confusion and loneliness and shame that I went through trying to figure out my diagnosis.

It’s making me even more determined to finish the book and get it out there.

This is really the demographic I want to work with. Kids. Teens. The more I hear from young patients the more it hits me just how much they can be helped. It took me until my twenties to feel like I got a grip on being a patient who also has a life. If I could go back in time and have all the skills and tools I have now–well, I can’t. But I can help close the gap for others.

The book is coming. In the meantime, get your head start by taking a look through some of these:

Next up: We all fight about why I should or shouldn’t get a Port/PICC Line.

July 8, 2014
ChronicIllness Writing and PR 21 comments admin
← Noisy Hospital Experience? Speak out! WEGO Health Needs Your Help! Let’s Talk About What I Put Up My Nose →

21 thoughts on “Soaring and Supporting: POTS Group #2 Brings Out the Teens”