I solemnly swear that I will be the worlds most fucking deliberate, dedicated, enthused flosser, water-pickers, brusher, and fluoride user that ever walked the face the earth.

Now don’t judge. Because the reality is that it probably wasn’t (all) poor dental habits that caused this grand  soon-to-be blight on my credit rating. It 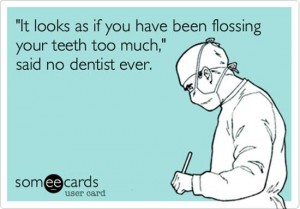 probably had more to do with the fact that I have GERD, took antibiotics non-stop for three years, and drink 8 bottles of sugary sport drinks every day that caused my sudden and horrendous cavity count.

But actually, I’ve known about this for like two years. A dentist told me not long after I got diagnosed with PIDD. I’d never had a cavity in my life up until that day and I was terrified of getting any of the eight of them filled. I decided to go ahead and have one filled and my dentist told me to never come back. I dry-heaved throughout the whole procedure. Including after he sprayed me with numbing spray where my nausea and gagging only got more intense. That was a new one.

So I went to a sedation dentist who told me I could probably wait a year to get them filled because they weren’t that big. So I came back in a year and he said I could wait another year. Six months later the same story–so when I went to a new dentist to get a cleaning a few weeks back he finally said, “You should probably take care of that.”

So I went back to my sedation dentist earlier this week and settled in for the cruel reality that filling eight cavities under sedation was probably going to bankrupt me. And holy crap did I see STARS when I got that estimate.

So I made appointment for early July to have the four hour procedure where they’ll do the entire thing at once.

I’m actually kind of relieved to have the appointment. Just because I’ve known about this for so long and I’ve been very weary of the idea that one might go bad suddenly and I’d need a root canal. But no surprises here. I’ve got a plan.

And I already talked with my dentist about preventing this from EVER happening again. She’s going to prescribe me some super toothpaste and oral wash and I’m going to continue my OCD brushing and flossing habits and I will probably invest in the world’s most magnificent electric toothbrush.

Jesus, you’d think for a girl whose had her stomach ripped open and intestines pulled apart TWICE, had her nose broken and restructured (TWICE), and gets an IV every week like a champ, I wouldn’t be so perturbed by a little dental drama.  You’d think that. But you’d be wrong.

May 24, 2013
ChronicIllness 25 comments admin
← “I Have Two Rare Diseases” LetsFeelBetter Author Shares Story in Editorial for Cosmopolitan Magazine Is There a Google Maps for Chronic Illness Management? →