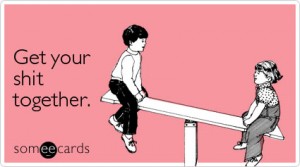 Apparently it wasn’t for Sara (mentioned in my last post, is the other patient at the clinic this week going through the program) she felt fine after hers—but today’s lesson got to me. Different strokes for different folks I guess! 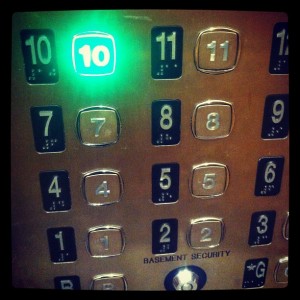 I traveled to the center solo today, my mom had to stay back at the hotel to get started on some work. I arrived at the office and asked to have someone come down to ride in the elevator with me. I felt silly about it, but I hate riding elevators alone. I always feel like I’m going to pass out on them and have terrible vertigo for about ten minutes after I step off (I feel like the ground keeps moving.)

Once I made it up to the office it was right down to business and hooked up to sensors. Our first test? Deep breathing.

Let’s take a step back here. I’ve had dysautonomia my entire life. If you think no one has ever taught me how to deep breathe then I’d like to take a leaf out of Frank Ocean’s book and tell you about a beach house in Idaho I could sell you.

In fact, for the few weeks leading up to my trip out here to Dallas—I did nothing but deep breathe. I deep breathed while walking in the mall, after meals, before I went to bed, while walking the dog, while doing my hair, while dealing with clients who were driving me insane. I’ve had two nose jobs. I take breathing of all kind very seriously and can say with expert experience what a large, impactful effect it has on the entire body. 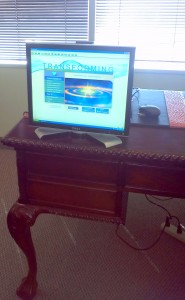 So I wasn’t surprised when the first step of the treatment program was learning how to breathe the right way. From the diaphragm – Dr. K told me, telling me to place one hand on my chest and the other beneath my breasts to see where the air was going. From the diaphragm—exactly where my vocal couch had taught me when I was thirteen.

The funny thing is that when it comes to pain—I don’t breathe from the diaphragm—but I also don’t breathe from the chest. I don’t breathe at all. Dr. Santa Maria has seen it whenever he gives me an IV. I either wind myself into a conversation where I talk so fast I don’t have the chance to take a breath, or I determinedly look away and HOLD my breath until it’s over. I think I need someone standing behind me to smack me in between the shoulder blades to get me going again.

Dr. K left me alone in the room, hooked up to the sensors and I tried to breathe right…four seconds inhale, two seconds hold, six seconds exhale. It felt like I wasn’t taking enough in and then that my lungs weren’t big enough to exhale out for that long. And it made me so dizzy and tired that by the time she walked back into the room and began talking again, trying to pull myself out of the stupor was like trying to walk through knee-high water.

I would sleep better tonight though, she promised me. All the sleep that I’ve been getting hasn’t been reparative sleep—and  that’s why I’ve been doing so much of it. Once I learned to breathe correctly I would get more restful sleep.

We took a quick break so I could get my hourly bottle of Powerade down and eat a few pita chips.

Then it was back to work in another room, where I was hooked up to a new sensor. This one attached to hand, neck and shoulders. I was shown a monitor on the screen that measured my muscle tension. Which basically filled the entire allowable area. I could adjust the levels by relaxing my shoulders and—you guessed it—breathing deeply.  It was kind of fun to play with. I also came up with a theory on my shoulder tension being that fact that I’m….ahem…pretty notoriously large chested and have to wear bras with straps built to hold the weight of several small anvils. Pushing them off my shoulders greatly affected my shoulder tension and made me consider joining a nudist colony where I could politely go braless in a careless world. 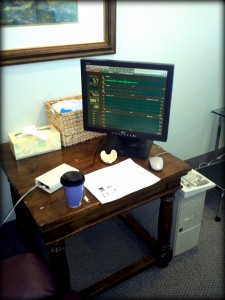 When I rejoined the rest of the room in the real world, I tried to focus my attention back on the screen—but boy the fatigue was getting to me. It’s no easy feat to deep breath for several hours without drifting off.

By 1:30 I was ready to head back to the hotel to nap, but on the shuttle ride home I realized I had about forty missed emails, a missed call from Marie Claire and was scheduled to work for the rest of the afternoon anyways.

It was not a good day for work. I was running into problems with all of my clients today and it’s really made me rethink how I’m going to handle working full time and going through this treatment. I can just say after one day that it is something I would not recommend to anyone else planning on coming here. This shit is exhausting—good, informative, empowering—but I was wiped out.

The later it got, the more exhausted I became and I was running low on Powerade. My mom and I finally decided to walk across the street from the hotel to a Walgreens to pick up some supplies—but on the walk over there I was really feeling the fatigue, so much so that I was having trouble walking and not dry heaving from the stress of it. Did I mention that we basically had to hike up a hill to get there?

I’m still not sure how we got back to our room but I was feeling pretty wobbly by then.