It’s a little over one week that I’ve been married.

Guys, I still can’t get over it.

The wedding went off without a hitch–and I say that because I made damn sure nobody was going to tell me if one wayward thread was coming out of my dress. I was ready set and go to be the happiest, most oblivious bride–and you know what? That worked out real well for me in the end.

The weeks leading up thte wedding were stressful, but with my mother (queen of the universe) my sister (superhero maid of honor) and our wedding planner (my temporary brain, decision maker, and negotiator)–everything just seemed to float on by.

I had some initial worries about the dress. See, when I tried it on back in March I’d thought that my port would be out by the time I got married in December. But then we decided the port should stay in. Problem was that my dress didn’t begin to cover my port. But we’d already ordered it.

And that wasn’t the only problem.

When it arrived–it arrived two sizes smaller than we’d ordered. Now not only were they going to have to hide my port somehow, but they were also going to have to open up the dress a LOT to give me breathing room (which I heard was important.) 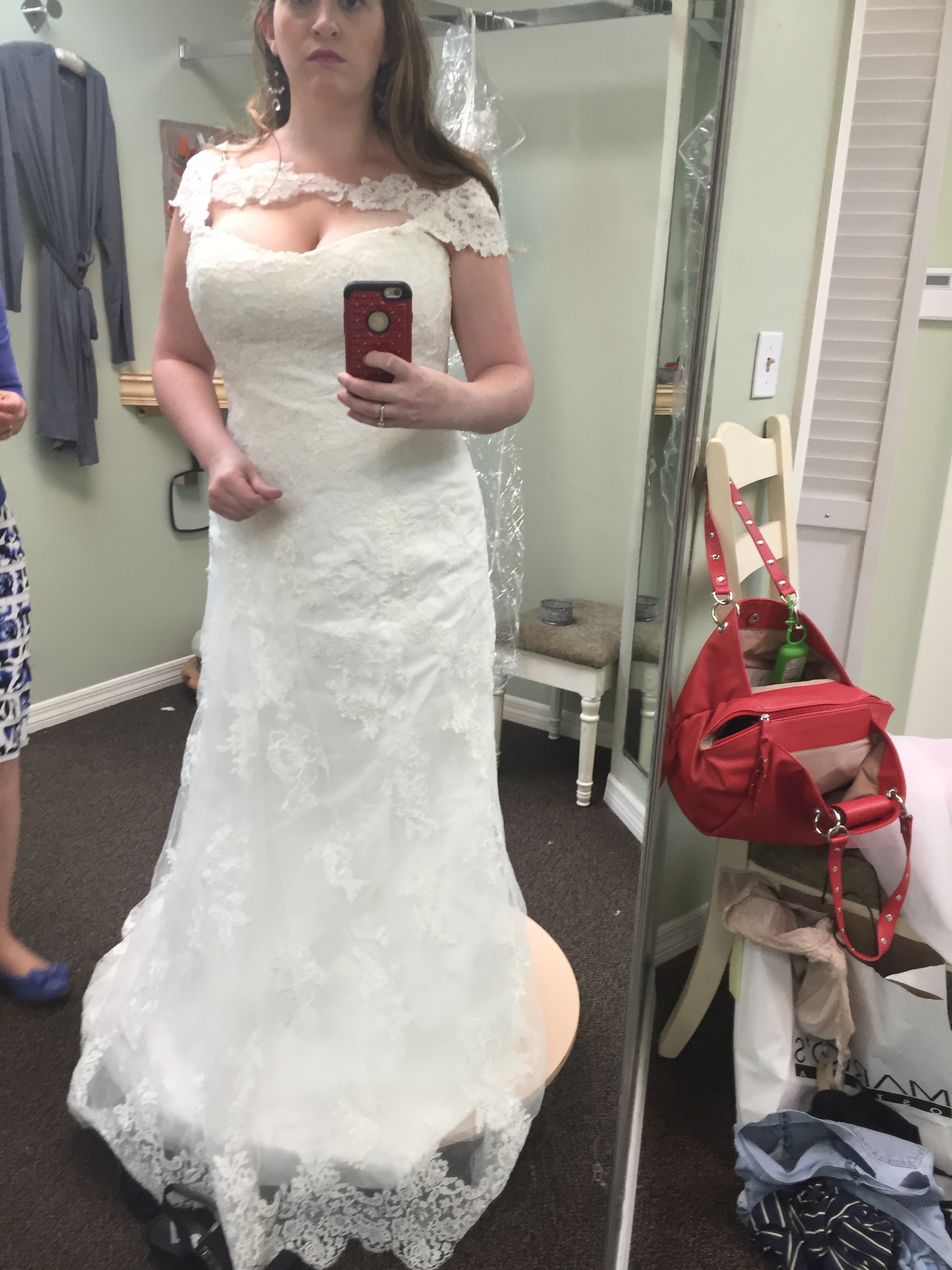 Please excuse my weird face in this photo. I was scared to breathe because that dress was full of sharp, pointy pins. This was the start of the lace overlay they custom designed to hide my port.

Here’s what it ended up looking like on the big day: 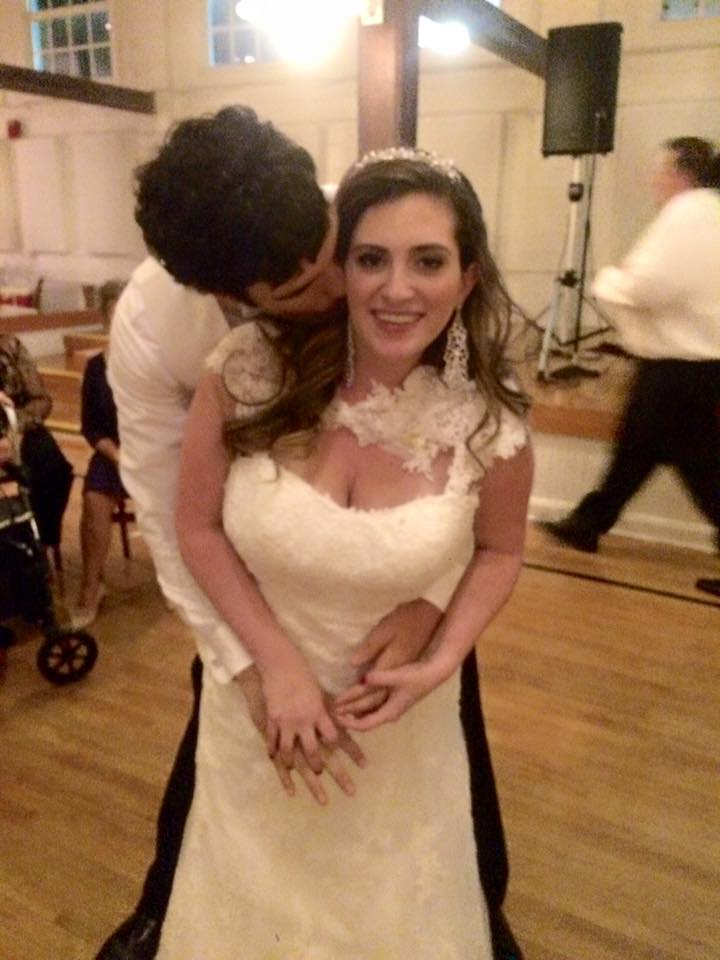 It was a completely different look than I had gone in looking for–but at the end of the day I ended up loving it. It made me feel like a wintery princess.

To make me feel even more princess-y, I got the royal treatment from my sister who, along with her fiancé (yes! Now fiancé!) (yes, there will be several posts on the wedding to get you caught up on the magic.) Joey, came down to stay for two weeks before the wedding. Brittany threw me the most incredible, thoughtful, fun and totally “me” bachelorette party a girl could ask for.

There was a pajama dress code: 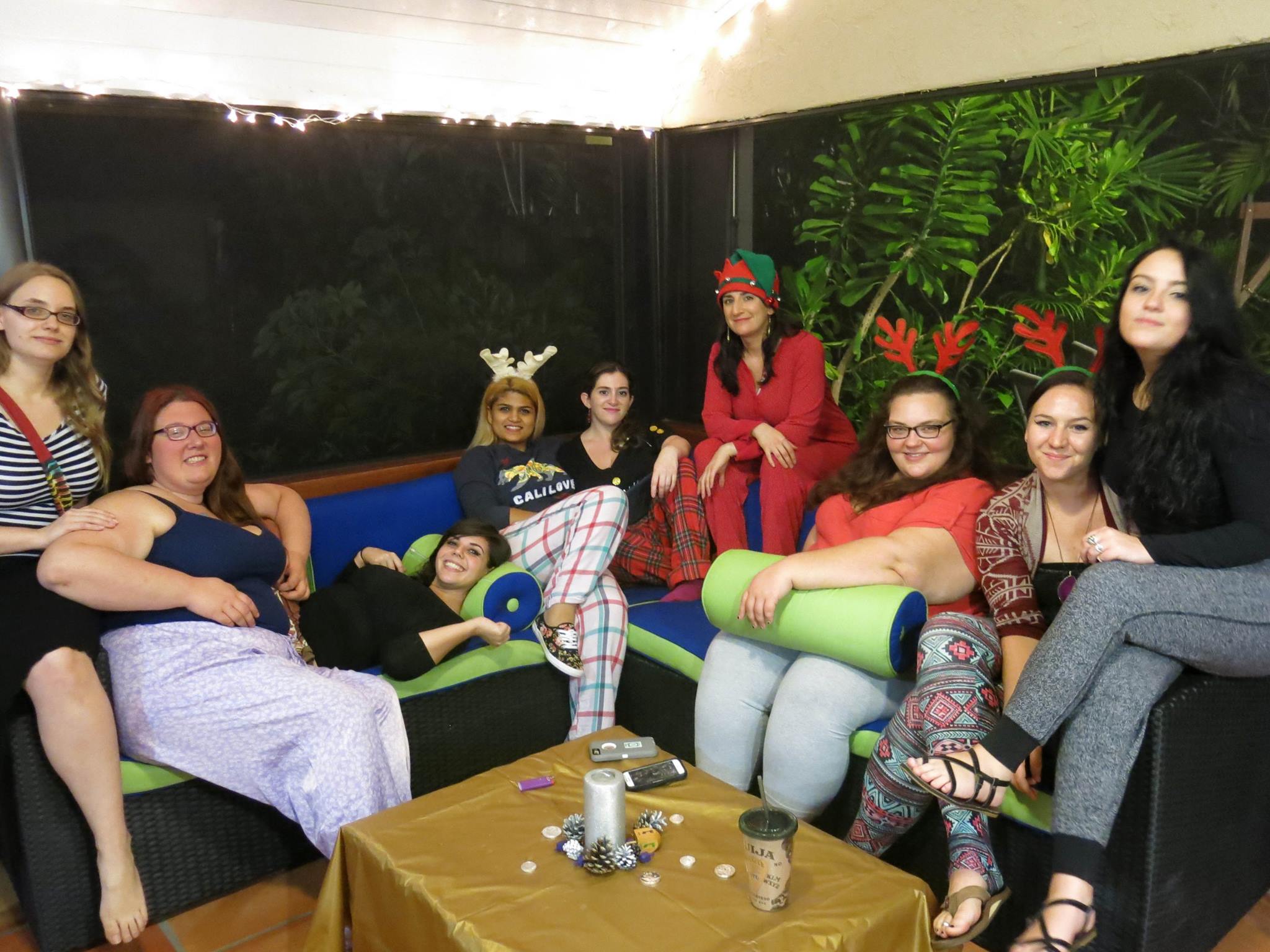 And a solid, clear mission for the evening: 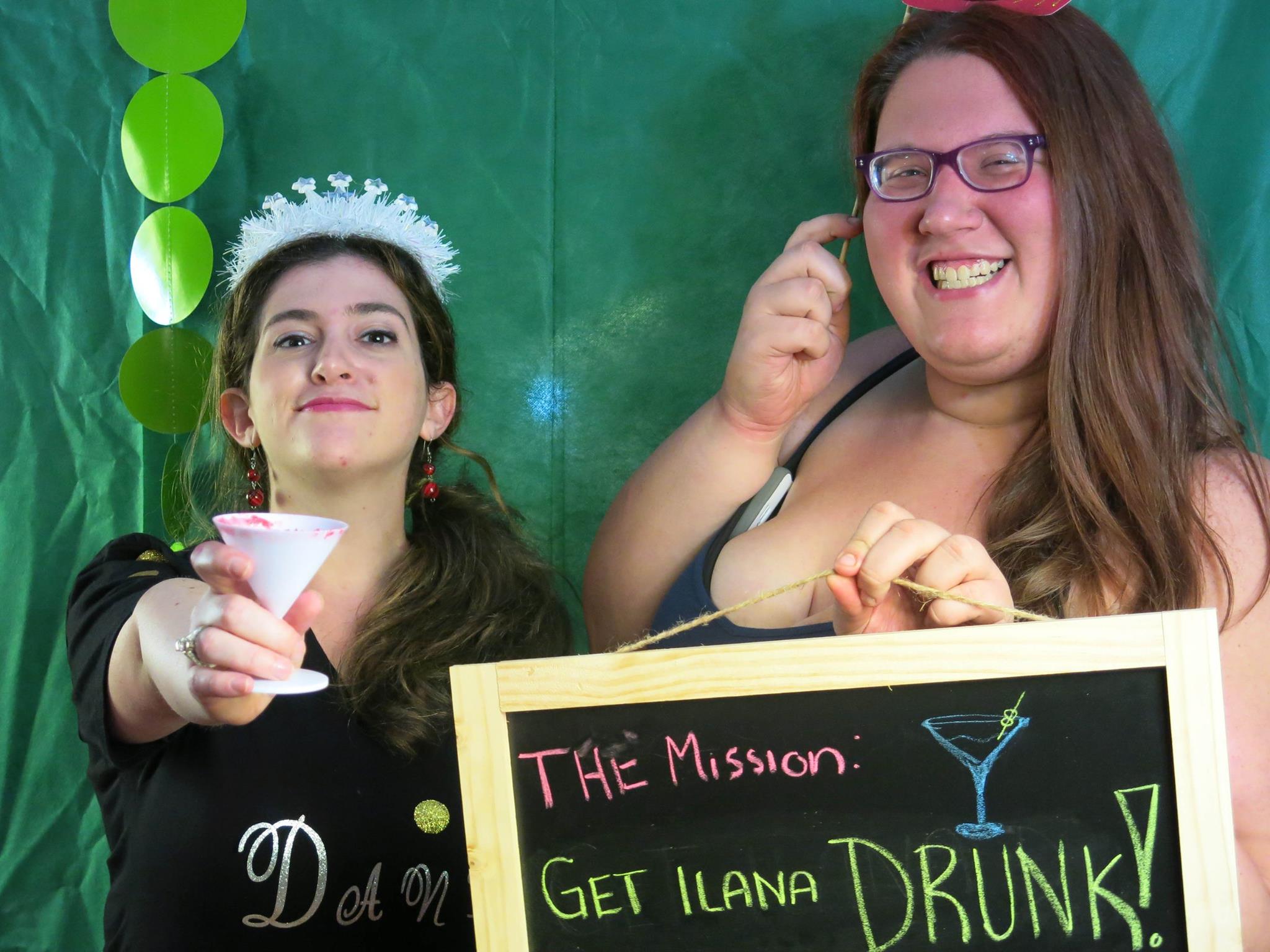 Which obviously ended in me needing one of these: 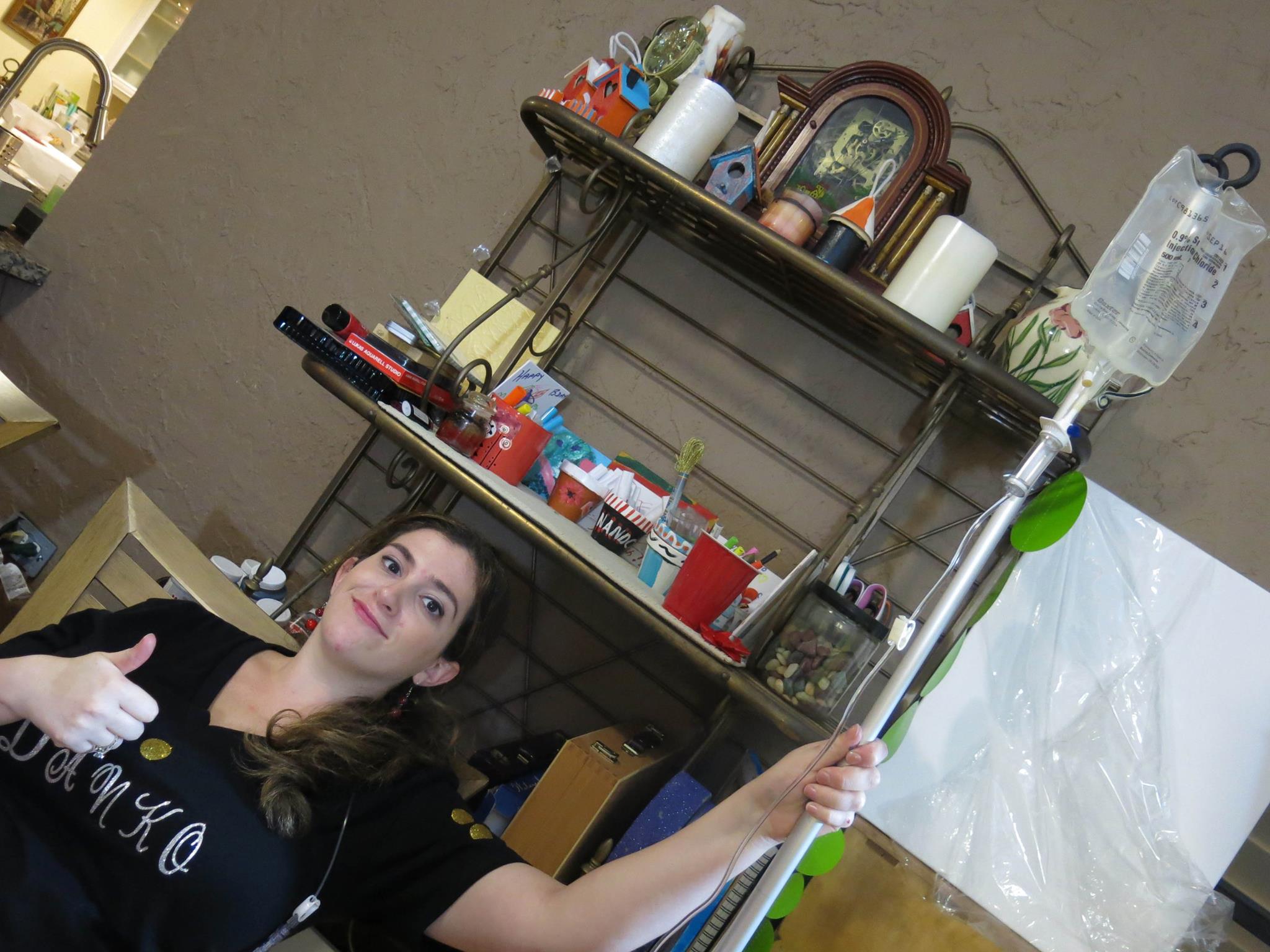 But it’s cool! It’s cool! I had a great time with my girlfriends and made a million memories.

I also finally got a chance to spend at least a little time with R.J’s family–including his Dad, step-mom, brothers and brother’s girlfriend. We are visiting them in Texas this summer (at last, I feel like I can actually travel!) We also got to spend time with Chrissy (my new sister-in-law) and her soon-to-be-hubby Josh.

We’ll be going to Padducah (sp?) Illinois this October to watch them tie the knot on his grandfather’s farm. I think the idea of attending a wedding as a guest sounds about a million times less stressful than hosting one! Can’t wait.

Through all of these days, I have to say–the universe was kind to me. I had a few migraines which resulted in me doubling my preventative medications (which put an immediate stop to it!) I also was able to eat pretty normally (I stopped eating dairy, tomatoes, chocolate, and some of my other major trigger foods about eight days before the wedding.) I think that was a solid choice. I also got myself on a better schedule with my IV’s so I wouldn’t get so dehydrated. (Because sometimes it just all comes down to bad planning with IV’s–you wait till you need them and it’s already too late for one bag to work.)

I slept. A lot. I rested a lot. I skipped things that were unnecessary and I patted myself on the back for having already bought all my wedding and holiday gifts.

I think some of my best tips for gearing up for a wedding when you’re chronically ill would be:

1) Don’t fuck up your routine: Don’t miss a dose of medication. Just be extra vigilant about setting alarms and having your medication ordered and available to you on time.

2) Don’t do more than you have to: Rest was really key for me in making the most of each moment. I skipped a few family dinners and just limited my trips to the grocery store and mall–just so I could spend more time giving my body a break before I really stressed it out.

3) Focus on the good: Just as I’m doing now for the honeymoon, the best part of prepping for your wedding is allowing yourself to be EXCITED about it–not nervous, or scared–but genuinely kid on christmas morning “excited!” Why not? You’re only doing this once!

Stay tuned for Part 2 where we’ll talk rehearsals, last minute details and the morning of!

December 29, 2015
ChronicIllness 28 comments admin
← Looking for Candidates to Interview for Book on Chronic Illness: First Three 2015: What I Did Last Year Besides Not Dying →

28 thoughts on “The Wedding Part 1: The Bachelorette Party, Family & How I Prepared”