I DID IT! I bought the plane tickets. I scheduled the trip. I packed my bags and off we went to New York! After spending months fretting about whether or not I’d make it through the flight without a panic attack, or my symptoms getting out of control–I finally just bit the bullet and did it all anyways.

And you know what?

R.J and I got to the airport almost three hours before our flight. We checked into security, and waited at the terminal. I made an impromptu purchase of (what I told R.J was totally necessary) a selfie-stick. And I took a fourth of a 0.5 mg Xanax.  I had made sure to get seats with extra leg space in the second row. It was a good choice because we boarded first which gave me time to get comfortable, and I didn’t feel as claustrophobic as I would have in the regular seats.

As for how I did with my hydration/port complications: I called ahead and told them I was bringing bags of saline, an IV pole, and tubing and bandaging kits. Got a letter explaining the situation from my doctor, and carried it all in a carry-on. We went through security without any real fuss. I took an IV in the morning before the flight and one later on that night before I went to bed.

The entire flight was easy. No turbulence, easy access to the bathroom. The thing that really helped me the most was probably the navigation screen on the little TV’s in the back of the seat. They listed both the speed and the altitude. If you have POTS–or anything wrong with your inner ear, you’ll basically get the shit kicked out of you with altitude changes. It is an awful feeling for someone who is already a little dizzy all the time.

Being able to watch the altitude change helped me to rationalize it with my mind–like “okay, I’m going to start to feel a little nauseated now because we’re rising up, but once it stabilizes, the feeling will go away.” It was the same with our dissent.

By the time the plane had landed I had only consumed another quarter of Xanax (and probably around six Zofran.) I felt alert, normal, but calm and even had the sense of mind to redo my makeup and fix my hair before heading out to baggage claim.

The flight back was even better. I tried a combination of Xanax and Promethizine, I rarely ever take Promethizine since it tends to make me very tired and is usually a middle-of-the night migraine aid for me.

I got on the plane with zero anxiety–the only issue was that I had to pee a near total of fourteen times. But as luck would have it, no one had the third seat in our row so it wasn’t a hassle for me to just keep walking in and out.

The medicine combo did have me falling asleep in the backseat of Carin’s car on the way home, but all in all–I would call it a success. 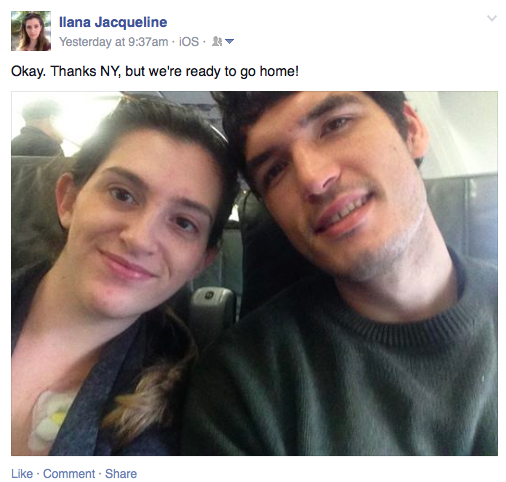 I’m really proud of myself and grateful to everyone who encouraged me to get out there. Being sick and uncomfortable is an awful thing–but knowing that you’re weighed down by fear is a much worse feeling. I feel like I can breathe a little now, and the idea of getting on another flight doesn’t cause extreme anxiety anymore. I’m really strongly considering a flight out to California this year for the Global Genes Summit & Gala. I have wanted to go for years but never thought I’d make it through the six hour flight. Now it doesn’t seem like such an extreme goal.

I have a LOT more to post about the trip itself, so stay tuned for Traveling with Dysautonomia Part 2

May 20, 2015
ChronicIllness 9 comments admin
← The Port, The Pity and the Perfect Wedding Dress New York City & Dysautonomia: Subways, Serendipity and Sucking It Up →

9 thoughts on “Traveling with Dysautonomia Part 1: Flying to New York and Back”