I was walking into Starbucks this morning when it happened.

See, I’d kind of expected it to happen sooner or later, but I at least thought it would happen on a day that I had brushed my hair. I had parked in the handicap spot—it was maybe the second time I’d used my parking pass since I obtained it a week and a half ago. And as I was getting out of the car, some guy sitting at a table outside looked at me with the nastiest look you could imagine and said, “Well, you don’t look handicapped.”

Now let me break this down for you: as someone who has had, in one sense or another, a chronic “invisible” illness throughout her entire life—you best believe I’ve dealt with my fair share of ignorant comments about it.

However, usually it’s by people I know in one respect or another that have the balls to ask and accuse.

But now that I’m taking my offensive chronic illness out into the real world, I guess its open season on me.

I looked back at this guy sitting there drinking his coffee—completely calm, having no idea who I was, what I’d been through, and how much the humiliation of utilizing the accessibility assets of my illness weighed on me.

I was all at once: humiliated, embarrassed, ashamed, indignant, furious, bewildered and shocked.

I looked at him, shrugged, and then stopped at the door as I was walking in. I looked back and said, “You never know when people are disabled. I have a heart condition,” and shaking, I went inside.

And I didn’t feel good about it. Because it was not a good enough response to someone who had just made such a powerful accusation at me. My response had done nothing to release my anger or educate him. In fact, he was probably still outside mumbling about what a bullshit artist I was and how someone with a real, visible disability would probably need the space I was so inconsiderately occupying.

I felt like crying, my heart was racing and I stumbled over my drink order and waited out the counter staring out the window at the back of his head. It occurred to me that the more I try to live my life, go out, be normal—the more discrimination I was going to end up fighting. This was such a sick, horrible feeling—and even if I had gone out there and yelled at him about what a stupid—thoughtless idiot he was—that he knew nothing—that he had no freaking idea what my situation was—it would have only made me feel worse.

I realized that I don’t have the energy to waste on people like this.

And as I got back in my car, intently avoiding eye contact, I started to think about how I wanted to handle this from now on.

And that’s when I came up with this idea: 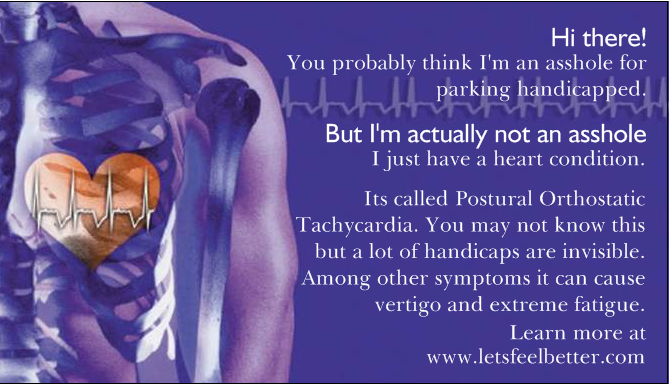 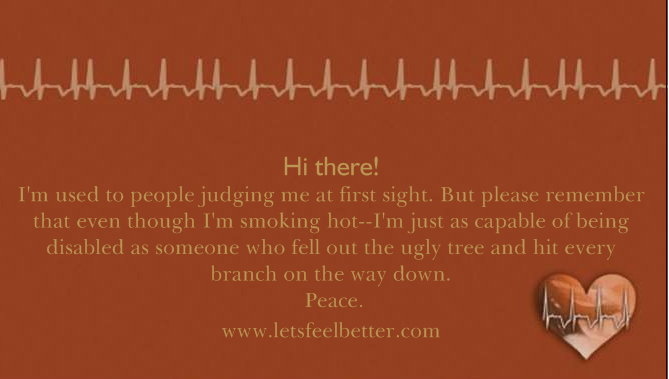 If you think it would help you, please go ahead and copy the idea! I just ordered these from vistaprint.com

39 thoughts on ““Well, You Don’t Look Handicapped” Adventures in Parking Near Assholes”