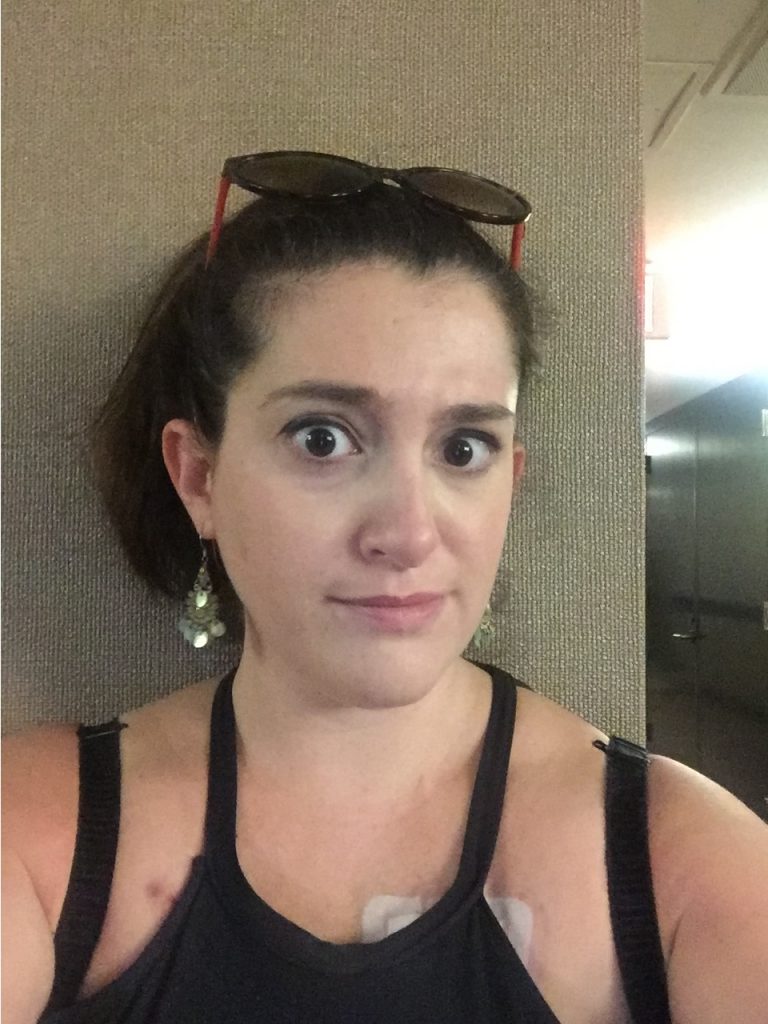 It’s been a stressful month. Packing to move to a new apartment. Uncermoniously losing our apartment a week before move in. Having to find a new apartment in two days because we were leaving for the conference. Doing a speech and running on nothing but Ensure and Gatorade. Getting off the plane and immediately moving boxes. Unpacking for a week and a half while doing job interviews every morning.

I was exhausted. But I mean, really, when am I not?

Last night I was sitting in bed, watching Netflix, trying to zone out—and I realized I was trying too hard because nothing I was watching was making any sense. I couldn’t follow any of the conversations the characters were having. I could barely remember one storyline to the next.

I got up, went into the kitchen, and ate a hamantash. My diet has been trash for the past month since my GP reversed and now anything that is not styrofoam goes through me in minutes. I pulled the almond milk out of the fridge and was about to make a carnation breakfast shake…

…And then my whole right side just went numb.

I rested my hand against my thigh and couldn’t feel either of them. My peripheral vision started going black. I stumbled down the hallway and into the office where R.J was at his desk. He turned around when he heard me come in. I looked at him and said, “I don’t feel right.”

And then I passed out.

For the next ten minutes I was in and out of consciousness on our office couch. Everytime I tried to orient myself I just became confused. I had never felt like this before. You would think someone with POTS would be familiar with a syncope episode but I’ve only ever “blacked out” and I don’t usually fall. And the world didn’t “right itself” after I went down. It just kept feeling awful. This was such a strange and crazy feeling—like I was on anesthesia.

I should mention that earlier in the day I finally got in to see a gastroenterologist. I’d been avoiding doing as much of an IV as I needed because I had missed my last GI appointment because I couldn’t leave the bathroom. Dehydrating myself was the only way to make sure my stomach would stand still long enough to get over there. But when I got back I should have done the IV. I just wanted to eat dinner and I knew if I started hydrating that dinner was just going to go right through me.

I ended up having to be taken to the hospital in an ambulance! I don’t remember much from it except that I kept asking for Zofran and they were afraid to use my port (because god forbid it exist for exactly this reason) and so they mixed the IV solution with a syringe of saline and pushed it into my mouth.

So that was the nasty and just made the nausea worse. 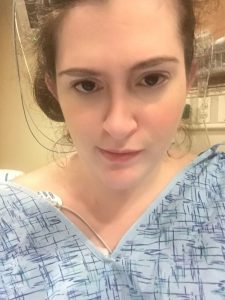 Me wondering why the hell I’m in an emergency room when I’m not literally (or neurologically) on fire.

We did a bunch of tests including a brain catscan to make sure I wasn’t actually having a stroke. Blood tests came back that my potassium was extremely low. After they gave me some supplements, an IV and some graham crackers I started to wake up.

You know—with my disease I generally have a pretty good idea when I wake up in the morning if today is going to be an emergency room day.

Yes, I’ve been sick and stressed for weeks—but I honestly thought I was just going to keep powering through it like I’d been doing. You get on a plane. You move to a new place. You find the knock-off of the $200 storage ottoman for $30—you start to think you are invincible and that your disease is as invisible as it looks to others.

And then the ground just comes up at you reallll fast.

I saw my neurologist this morning and was hooked up to my own IV during the appointment. We hope this was just a bad fluke and he wants me on bedrest for the next two days just getting in as much fluid as possible and eating real food and not just bread and bread products.

We also decided that moving forward I need to be on a hydrating schedule because dehydration literally makes me so stupid I don’t realize my plasma volume is plummeting and my legs completely cramping up are more of an emergency alert than a polite suggestion to hook myself up to saline.

I never forget that I’m sick. I just tend to forget that I can’t reschedule a physical crisis for a less hectic moment.

When was the last time your body decided to tell you to go fuck yourself?

July 27, 2017
ChronicIllness 12 comments admin
← My Week: Speaking at the Dysautonomia Conference & Moving Into a New Place How Do I Make My Hospital Room Feel Like Home? →