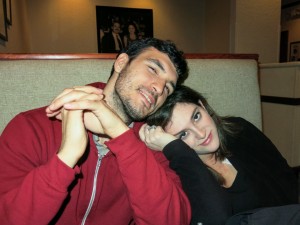 R.J loves when I don’t straighten my hair. After a lifetime of unmanageable curls, I hardly ever let it down unless it’s flat ironed. This weekend was the first time I’ve let it curl since I cut several inches off. With lots of product and absolutely no brushing, it actually looked pretty nice.

At least that’s what R.J told me when he took me out for my belated birthday habachi dinner last night.

So, with that little boost of confidence, and my best and most flattering Saturday “not-working-out-but-could-possibly-work-out-later” clothes I went about running some errands the next morning.

First thing on my list? Get gas. Also get Gatorade at the gas station. I was out and I knew I had a long day in front of me–visiting my Grandmother in the hospital and then heading over to help my friend move. So after filling my tank I bounced inside, found one of those squeeze bottles of Gatorade (which are the MOST fun to drink) and brought two up to the counter. 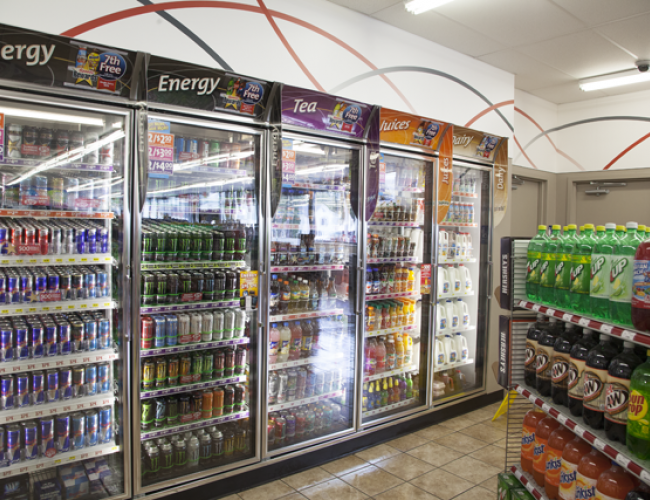 Here are some of the things I was thinking about: high waisted underwear, Amazon Pantry, how much dog food was left in the container at home, how many calories were in that hot chocolate I drank yesterday, what street connected to Jog to get to Military and what were the possibilities of getting home in time to walk Happy at exactly 5:30?

So maybe it was just that I wasn’t prepared for it when this came out of the cashier’s mouth:

“What is that? You have some kind of problem?”

My first reaction to his questions was: huh? Oh my god. Do I have a nose bleed? Is there something on my face? Did I accidentally pick up a bottle of Pepto Bismol when I was reaching for the Gatorade?

My second reaction was to make sure he didn’t feel sad. Why? Who the hell knows? It’s an incredibly indelicate thing for a 40+ year old man to point at a girl’s chest with open disgust and ask  what is wrong with them. Why should I protect his feelings? But then I don’t want him to think I’m, like, dying of cancer when I’m clearly feeling so bodaciously on point today.

And then he just kind of stood there waiting for the rest of the story.

And I was like man, I have got places to go and Gatorade to drink and this is so not the moment for me to educate you on the long and complicated and so, so difficult to explain matter of what is Postural Orthostatic Tachycardia Syndrome and why I’ve got a tube sticking out of my chest 24/7.

I handed over my credit card and just got back in my car feeling all deflated.

It’s kind of a mixed bag of etiquette I want to describe.

If a kid comes up to me and points at my chest and says, “What is that?” I’m not going to be offended. They’re kids you know? I’ve watched kids go right up to other adults and ask them flat out, “why are you so fat?”

But if you’re a grown ass man and you’re pointing at a woman’s chest with disgust for any reason–I don’t care if she’s got a bullet wound–try to keep the curiosity to a minimum and just call 911.

I’m not saying it’s never okay to ask. I think I like it best when people introduce themselves first and let me introduce myself and then maybe say with sincerity “I’m curious, would you tell me what that is?”

I don’t have a problem with curiosity, really. I just don’t like when cardboard cutouts pop up from the floor and start asking somewhat personal questions during social exchanges that shouldn’t last more than 90 seconds.

There is also a lot to say about a time and a place for curiosity. Let me start by saying that if you are over the age of 13–it is not IMMEDIATELY upon seeing me in your line of vision. You have to remember that I don’t remember that I have a port all the time. I chose to have that port so I could have a life and now I’ve got one–good, bad and ugly. So I may be  feeling incredibly upbeat that day and may not feel like going into what inevitably ends up being a long conversation about my disease.

I don’t know. To others with visible ports or tubing–what do you say to the surprise “WHAT IS THAT?!”

I did this once before for my handicap parking, but I think it might be time to whip out the business cards once more. What do you think of these? 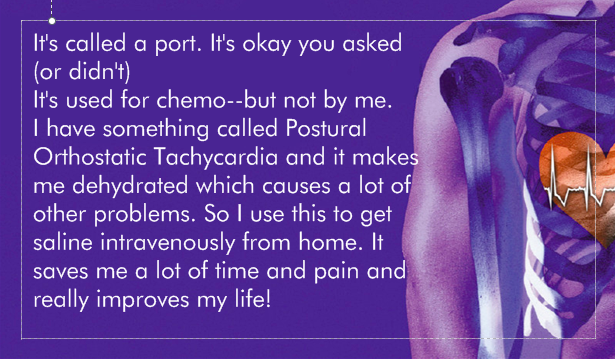 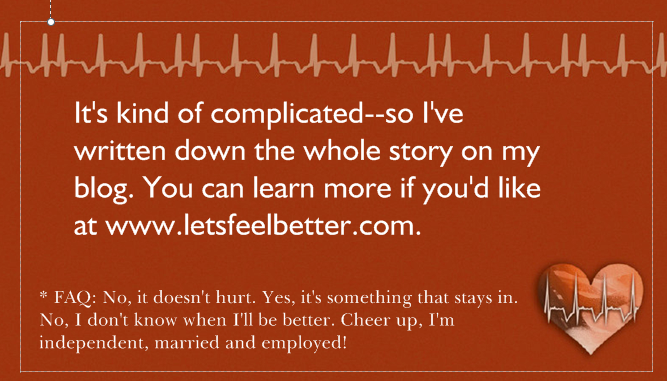 January 30, 2016
ChronicIllness 29 comments admin
← The Wedding Part 2: To Have and to Hold and to Have Somebody Hold Up Your Wedding Dress I Giveth a Port, And I Taketh It Away (Well, at Least for a Week) →