I am not knocked up.

I always love to quell a good rumor before it gets started.

This is not a mommyblog. I have not purchased any baby clothes or diapers. I did once buy a pair of maternity jeans but they were obscenely comfortable and I hate tight pants.

My point being that no one is peeing on a stick. You are not going to be seeing ultrasounds of my lady bits in any near-future posts.

I am not. Repeat. NOT getting pregnant.

At least not like…tomorrow. Or this year. Or possibly next year.

Not knocking any other 24-year-olds who are already on their second or third kid. I’m just not mentally, emotionally of physically capable of even imagining taking care of my own insane body, Happy and ANOTHER living, breathing thing.

So why even go there? Because I’ve got an appointment there tomorrow at 1:30.

Let me explain. The last time I saw my gyno I had this little horrifying thought bubble up in my head.

Crap. What if I WAS pregnant right now?

It would probably already be dead.

This was legitimately my first thought.

Between the massive amounts of pain killers, heart medication, x-rays, and myriad of other treatments that I can not imagine would be good for baby–that sucker wouldn’t last ten days in my toxic minefield of a body.

So I grabbed for a sticky note in the waiting room and started writing down all of the medications I was currently on–had been on recently–and was likely to be on again in the future and handed it to my doctor. After my exam he went back into his office and then met me at the check-out window.

“These are pretty much all class D or lower medications. Meaning they’re either clinically proven harmful to a fetus or they haven’t been studied.”

“So I wouldn’t be able to take any of these?”

Way to sugarcoat it bro.

I had that sticky note in my wallet for a while. Time and again I’ve proven that I can’t sit upright without my heart medication. Can’t eat without Desipramene. Can’t even get a grip on my immune deficiency without my allergy medications and high-dose antibiotics.

So was pregnancy completely out of the picture? At 24-years-old was I already doomed to never get pregnant? That was an unexpectedly sad consideration.

I brought the subject up with Dr. Santa Maria. And we talked about a few things–genetic testing and whether or not I’d want to have a child if the likelihood of them having my same (or worse) medical issues was a high percentage. We also talked about whether or not I’d be willing to be on bed rest for 9 months if there was no replacement for my heart medication.

I told him about the first phone call I’d ever had with another POTS patient. She’d been pregnant, but wouldn’t recommend the experience. She had given birth in the cardiac unit and had nearly had a heart attack during labor.

It wasn’t exactly an encouraging conversation.

But the truth was that there really weren’t any clear answers about my case in particular. Which meant that if I really wanted to know–and by now–I REALLY wanted to know, I was going to have to seek out a specialist who might be able to help me map it out.

So I did my research and found a high risk OBGYN in town who might be able to answer my laundry list of questions.

This weekend I decided that I’m going to take a month off of work for my wedding. Two weeks before the event and two weeks after.

I think this is a pretty reasonable estimate of how much time I’ll need to gather enough energy and resources to get through the big day. Even though the wedding is over a year away, I like to plan things like this out in advance.

I reasoned with myself that this was equally justified as I sat in a waiting room full of baby pictures and flyers about birthing  classes. I really wasn’t planning on telling anybody about today’s appointment–it was kind of humiliating. Who plans out their pregnancy several years in advance? What would R.J think? Or my friends? Is this something people do? Or am I just…a special kind of worrier? But the closer I got to the appointment, the more justified about it I felt.

I don’t want to spend the next two or three years wondering if pregnancy is a possibility for me–only to find out that it isn’t. That it’s not a reasonable reality for someone in my situation. And I don’t want to carry around that weight with me without really, definitively knowing that my life won’t go down that path.

I want to be excited about my future. And if that means getting reassurance from a doctor a few years in advance–I’ve got every fucking right to do it without humiliation.

So I brought my life’s work to the appointment. 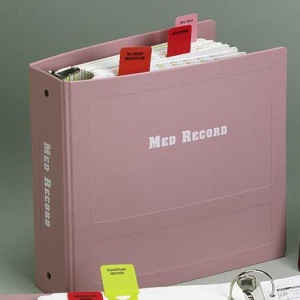 *not my actually binder because it’s in the car and I didn’t take a picture and now it’s dark and I don’t want to go outside.

Along with my latest immunology results. I had already filled out my novel of paperwork, handed over my insurance card, license, and credit card for my co-pay. And when called, I nervously made my way back to her office.

This doctor had a lot of great reviews online. She’d handled a lot of unique cases and I was immediately relieved when she said she’d already started reviewing my diseases. She admitted that she hadn’t had a patient with POTS or PIDD, BUT she had treated a patient before with gastroparesis!

The first thing I asked was if we could go over my medication list. I was pleasantly surprised to find out that the majority of my medications CAN be used during pregnancy. Did you know that you can take Atenolol during pregnancy? Almost all of my GI medications were safe too. Although there were some medications she suggested I get on a lower dosage of, she really allayed some of my fears about how I would handle my symptoms during a pregnancy.

That was the first ten minutes of the meeting. And for that ALONE I would recommend that anyone and everyone who has a rare disease or chronic illness, who one day–even if its’ ten years from now–wants to get pregnant–Go. Make an appointment. It was that easy. When I think of the hours I spent just silently panicking about how I was going to handle my heart rate and blood pressure during pregnancy because I didn’t have all the information–I felt a lot more stupid than I had in the waiting room or on the phone trying to get the words “I want a pre-conception appointment” out of my mouth.

I’d brought a laundry list of questions and scribbled everything down in my notebook. Even though some of them felt a little silly–getting some solid feedback on them was really exciting. I felt like I’d been carrying a lot of worry–and sadness about the potential that I might not be able to sustain a pregnancy. But she assured me that it would be possible–if not very closely monitored and assisted.

For what she didn’t know–she promised to research and relay. Even though she had a lot of answers for me, we both discussed the reality that this was something new–to me, to her. She didn’t have many patients with rare diseases. There are not a lot of people who have POTS, PIDDS and Gastroparesis in the severity that I have them that choose to get pregnant. And even though I choose to experiment a lot with my treatment for both, a pregnancy won’t give me the flexibility of failing or experiencing the backlash of pain or discomfort–at my own tolerance. It won’t be about my limits anymore.

She even offered to call Dr. Santa Maria to see if we can make a plan for me–for when I am ready.

And on the topic of whether or not I was ready.

“If you had come into my office today, in the state that you’re in right now and said that you wanted to get pregnant with in the next three months. It would have been a no, I would not have recommended it,” she said. “But the fact that you’re coming to me now, and that we’ve got maybe two or three years to get you in good health–that seems very possible.”

We talked about genetic diseases and discussed different tests I could take, and even a process of artificial implantation that we could use to biopsy and test for different genetic mutations. We talked about surrogacy. And even though these kind of things are not what I imagined for myself–or not even something I have any clue as to whether or not I’d be able to afford when the time comes–it was nice to know that the option was there.

And I be like giving out free fist bumps to all the pregnant diabetics in the waiting room….

It took a few hours of research. A phone call. A $25 co-pay and an hour of my life. And I had a whole new perspective on what pregnancy for me could look like.

Having two uncommon diseases means the guidebook has always been too short and never specific enough. There is no instruction book for living with POTS or PIDD. There is no doctor that can say specifically: everything is going to go down exactly as we plan it and you’re going to be fine at 9:30 in the morning on Sept the 21st.

I’m preparing myself for the reality that pregnancy will be no different. I’m going to have to lay down a lot of soft landing spots. I’m going to have to make decisions about what is most important to me (there was discussion about the fact that I will probably have to stop working during my entire pregnancy–and will potentially be on bed rest for the majority of it.) But if it’s something I want, and I’m determined to go through the brush and carve my own path to the best of my ability–I can have it. Why shouldn’t I have it?

I left the office knowing that I have a lot of work to do to be ready for that part of my life. It’s not just the house and the health insurance and reading the handbooks and finding the right pediatrician–it’s accepting that I will be walking blindfolded into parenthood trusting the doctors and support around me to steer me in the right direction.

But how is that really any different than motherhood is going to be for anyone else?

Do you have a chronic illness and gone through a pregnancy? Feel free to share your story below–I know I’m not the only one who wanted some answers!

22 thoughts on “Why I’m Not Pregnant, But Went to See a High Risk OBGYN Anyways (Chronic Illness and Pregnancy: Extreme Planned Parenthood.)”