I didn’t wear a lick of make up today. No blush. No gloss. Not even a little concealer–and I have to tell you I’ve basically been putting that shit on when I sleep since the dermatologist pointed out that I have sun spots on the side of my face a couple of weeks ago. I was like are you fucking kidding me? I don’t even go out in the sun. I’m practically a hermit. And she’s all like “well, you need to start wearing more sun screen, or else you’re going to ruin your skin.”

Meanwhile, her office makes me wait AN HOUR when there is NO ONE in the waiting room and she’s a total bitch and I don’t trust her stupid face or anything she says about my spotty one.

(But I did invest in that $40 concealer from MAC that comes in a jar about the width of my thumb. But that’s not even my point.)

The point is that I woke up this morning and was just like maybe today is a “Tough Cookie” pajama pants and plain-face day.

Except that it really shouldn’t have been because about an hour into my pop-tart eating, email answering morning–R.J called.

So I basically had two choices–oh, and neither of them involved not picking him up because I would drive to Georgia if he needed me (duh.)

My choices were between going upstairs (oh the spoons) and putting on some make-up or just taking some nicer clothes out of the dryer, putting on some XL sunglasses and relying heavily on my cleavage to distract from my sun spots and under eye bags and dehydrated/chapped lips (boy I describe myself as a real sex kitten, don’t I?)

I chose to save the spoons, grabbed my keys and headed out the door.

This is the daily life of a long-term relationship between me, my fiance and dysautonomia. 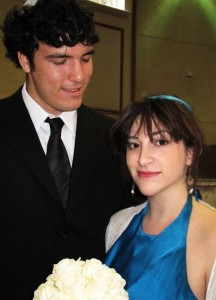 When I think about R.J and how our relationship handles the continuous, ever-present strain of my chronic illness all I want to do is laugh.

I think about the first three months of being on birth control and how I spent our romantic evenings on the floor of my bathroom with hormone-induced nausea. I remember thinking: this is really counterproductive.

I think about the first time I had laproscopic abdominal surgery and when he had to carry me back and forth to the bathroom, sit me up on the toilet, then stand outside the door for twenty minutes while my anesthesia-addled mind and shy bladder tried to remember how to pee.

I think about him and my mother singing Happy Birthday to me in the emergency room on the night I turned 18 (and was simultaneously writhing from the pain of a burst ovarian cyst.)

I think about the countless times he’s reached out to pull me close–only to realize I’m already fast asleep.

Relationships with chronic illness are chock full of reality.

There were times I doubted we’d pull through the hardships of my health. In the beginning I fretted every night that R.J went out without me because I was sick or exhausted. Would he hook up with other girls? Would he lose interest in me? Or worst of all, would he be dragged down into the isolation I was confined to?

The answer to all of these was no. And even though my heartsick seventeen-year-old brain could not fathom the idea of a guy wanting to stick around a hopeless homebody like me–R.J somehow seemed to defy the odds.

I wasn’t always very forthright with my concerns–instead I used the volcano method were I would basically wade around in the drama inside of my head until I practically exploded from the stress of it–bursting out in tears or tantrums about how I just knew he was going to get fed up with me eventually, and how a relationship with someone who had so much energy and a social life would never work!

And then R.J proposed something so crazy, so off-the-wall stupendous–it just might work. Why didn’t I just tell him what I was feeling, when I was feeling it so that he could clear up the confusion before it started.

So I told him when I was scared he’d get bored of me, or when I felt like I had failed him as a partner. He’d console me, but he wouldn’t wallow in it with me. He’d just share his side of the story (most of the time about how he didn’t mind going out most nights with the guys without me, and that he would swing by later.) I told him I worried that other girls would catch his attention—

And let’s pause for a minute on this one because if you knew me–if you knew us–you’d know that this was the most ludicrous concern of all for several reasons. The first being that this boy is in love with me just as much as I’m in love with him. And he knows that if he ever strayed I would neuter him, sic his own mother on him, and then write mean blogs about him. But I think that every teenage girl has these fears about their relationship. The older you get, the more secure you get both about yourself–but also about your long term relationship.

The second part of this equation is that if there are video games, board games, any one who will talk to him about science or superheroes–he’s not looking at other ladies. He’s focused on his nerdiness.

These days R.J goes out without me most weekends. We usually spend the day together, go out for dinner, hang out with each other at home–and then at around 10:00, if R.J still has energy he might go to hang out with his friends, see a movie or go to a party. He gives me a kiss goodnight, I pass out upstairs–and I wake up in the morning knowing that my fatigue hasn’t detracted from the social life he still has–and the trust between us has left a pretty comfortable cushion where my deflated self-esteem used to be. 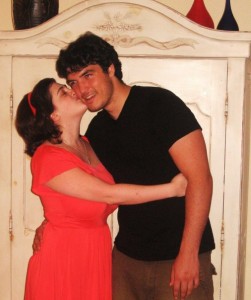 Maybe this is all relationships, not just those with chronic illness–but you have to talk about these things or else they fester. And the funny thing is, the real punch-line is that it’s never as big or as horrible as you make it out to be.

My chronic illness isn’t ruining his life any more than it’s “ruining” mine–and it takes a lot of strength and a lot of time to get to that point where you believe you are worth every ounce of your trouble. And I guess it takes a pretty special guy to help you realize that, however stubborn you are–and for however long it takes to get it through your head.

Teaching Each Other How to be Supportive

There are no books out there (YET) about being the perfect partner to someone with a chronic illness. And just like everyone has different buttons that can be pushed in relationships–the same goes for relationships with the element of chronic illness. Ultimately it comes down to you–the person with the illness–to be responsible of the education of your partner.

They don’t just pull this stuff out of their butt, you know?

None of their friends are going to be like, “yo–dude, dude. It’s her back pain that’s making her such a bitch. Give the girl a shoulder massage and she won’t cry about you not taking out the garbage.”

You have to actually communicate these things. Patients with low energy issues have to plan and think and consider EVERYTHING. And girls, most guys don’t think that way. So no, they’re not going to understand why you need to know three hours ahead of time just how long they plan on hanging out at the comic book store.

Protip: When it comes to every day life in a relationship with chronic illness you can never communicate too much.

Don’t, like, stalk each other. Or sync your Google calendars (weeeiirrddd) just try and give each other a heads up on what your plan is for the day. ( “Do you want to go out for dinner tonight?”  “Maybe, but I have to give the dog a bath so I might not have the spoons–so be warned you might be picking up a burrito on your way home from the gym. “)

R.J went to the gynecologist with me once when we were teenagers. It was so weird at the time, but I really respect him for having the balls to accompany me there. He came with a list of questions for my doctor and it really touched my heart that he made the effort and genuinely cared.  When R.J does come with me to the hospital or sit in with me during a doctor’s appointment it can be a real comfort–but it’s not always required.

I go for an average of three doctor’s appointments per week–and Iv’e got my own agenda for them. I know what I need to ask, what needs to be accomplished. Basically….

In fact, I take a lot of pride in handling my own medical plan.

Sure, I ask for his opinion sometimes, and I make sure to clue him in if I’m going to be expecting side effects or dealing with a shift in my health, but he’s been pretty good about respecting my choices and jumping in to help me research new treatments.

Hospitals…now that’s another story…Stay tuned for part two of this post!

July 22, 2013
Relationships 25 comments admin
← A Video Update: Thank You! Your Long Term Relationship, Your Sanity, and Your Chronic Illness: Part 2 →

25 thoughts on “Your Long-Term Relationship, Your Sanity, and Your Chronic Illness: Part 1”