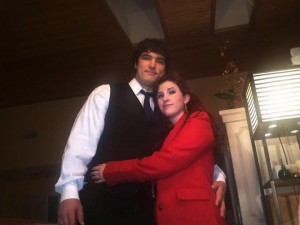 Up until the day we met, my mom was my ER buddy. She’d come with me, she’d make me laugh, she’d help me set the doctor’s straight, she’d be my voice if I was disoriented or in pain. And since R.j has been in my life he’s been right beside her at every ER visit, at three in the morning, rain or shine.

Now we live together and many of those nights it’s just him and I, alone in the hospital getting an IV when I really need help. It’s taken him a while to appreciate that there’s a rhythm to life like this. There’s a way of putting your (and my) anxiety about whatever is happening on the back burner and just dealing with the problem at hand. These days, it’s very seldom that I freak out about something to do with my treatment.

I’ve had tubes stuck up my nose, down my throat, in other…places. I’ve taken IV meds that made me laugh so hard I couldn’t breathe and they had to give me IV xanax to set me straight. I’ve had surgeries on my eyes, my stomach, my sinuses…I’ve had a mixture of dye and blood shoot out of my arm and hit me in the face while strapped to an MRI. You name it, I’ve done it (and usually the second time without a sniffle.)

But there are a few things about chronic illness that basically make me want to go full-on axe murderer and here’s how we handle it.

Helping Out Around the House–I can’t do what I used to anymore.

I think it was around this time last year that things really started to change with my energy levels. I realized that my days were getting shorter, my nights longer, and the clarity percentage of my brain was shrinking by the hour. I knew I wasn’t going to be able to do the things I’d been doing since we met and it took a while for me to break that down for R.J. The first thing that fell apart was the house. We had only been living together for a few months, and because I worked from home I was usually the one cleaning the majority of the time. But then I had a slew of hospital stays where I would come home and the house would be a disaster. It took many a breakdown for me to get it through to him: I need help. I need you or I need a housekeeper.  He chose a housekeeper. Problem solved.

I was lucky in the fact that before we had moved in together, many moons ago–R.J was unemployed. Well, technically he was employed but it was like the worst job ever and he made practically nothing. This was a shit time for him, but a great time for our relationship. Because we weren’t living together it didn’t impact me as greatly as it might these days, but I realized a few things because of it: the first was that it didn’t make me love or respect him any less. The second was that if I wanted to go out and he wanted to save, I would be paying–and the third was that I knew wholeheartedly that if the same had happened to me (which later, it did) R.J would step up and do the same. I’m not saying I”m not weird about money, because I am. We have separate bank accounts and although we share the brunt of the bills for things like rent, electric, cable, etc.– we go right down the middle. We’re not dating anymore, we’re partners and taking equal responsibility–at least in our situation–is what feels the most comfortable. This is not to say that he doesn’t take me out for the occasional dinner, or that I don’t pick up the groceries alone every now and then–but I rely on him A LOT for things to do with my chronic illness. If I can handle it (which like I said–sometimes I can’t) I contribute as an equal partner–and I made sure we didn’t move in together until I was sure I could.

So how do you do that?

I saved for a long time before we moved out, and even today I pad that savings account for the months I can’t work. It’s not easy–and the account isn’t like, flowing with endless revenue–but it is enough to get me by for a few weeks while I find freelance work again.

Before we moved out of our parents house we each built up a considerable amount in savings. And we had many discussions about what we were willing to spend on an apartment with all of the other bills we knew we’d be paying. We decided that even though we technically could afford a 2 bedroom 2 bath apartment in town–we’d keep looking to see if we could get a better deal. We looked for SIX MONTHS and we ended up getting an apartment that had about half the stuff on our “must have” checklist. It had the 2 bathrooms, and the 2 stories–but it also had no bedroom door (loft) was a few miles outside of our chosen area, and didn’t have a backyard area. However, the community paid the water bill, the air conditioner was brand new (and in Florida that’s a goldmine–I think our first electric bill was only $50) and the landlord had just replaced all of the old appliances with energy-efficient ones. The location was closer to my mother than I was expecting, which also turned out to be great because I knew I’d need her help.

Support (It Takes a Village)

I think the best advice I can give to other couples about supporting each other through a chronic illness is to not be alone. It takes a village, really, and you should take support from anyone and everyone who offers. Reach out to your families, reach out to your friends, hire people (and yes, it’s worth the money wherever else you have to cut from in your budget.) Relying solely on your partner for ALL of the support you need is a recipe for disaster. If that means moving back closer to home  or getting a second babysitter–then that’s what you need to do.

At one point in our relationship I had chronic bronchitis. That shit would not leave me alone. So finally my doctor put me on a strong course of steroids (prednisone) to put my immune system into turbo.

And oh my god did I get fat. Like crazy fat, crazy fast.

My face got round (moon face) I looked about 6 months pregnant and the rest of me didn’t exactly scream “get this girl a bikini” either.

It totally destroyed me. I would see pictures of myself and feel like my eyes were bulging out of my head, did I really look like that?!

And I did–and them’s just the breaks of prednisone. Couldn’t do shit about it. Sure I had enough energy to push past my bronchitis to go to class or get through work–but it didn’t mean I was energetic enough to go to the gym every day.

There was a whole discussion on my last post (which in my opinion had nothing to do with the original post and made me laugh like crazy) but it was about the make-up and how I walked out of the house without it.

R.J goes to the gym for two hours a day, five days a week and counts calories like a hobby. He doesn’t eat after a certain time at night and sometimes gets in his car to buy candy only to come back in from the parking lot weary and sad saying, “I just couldn’t do it.”

I eat what I want. Exercise whenever (seldom) I have the energy. Straighten my hair only once a week–I think, in the grand scheme of things–a little make up and throwing out the granny panties are probably the least I could do.

I’m not saying I spend forty minutes getting dolled up before we go to Publix, but brushing my teeth and hair? Putting on concealer, blush and eyeliner?  Wearing a bra that actually does something for my shape? Small sacrifices, you know?

And if I drastically lose or gain a lot of weight in a short period of time–I buy new jeans. It’s not sacrificing myself to the vanity gods to buy a pair of cuter jeggings. I’m not going to get axed by the feminist army for wearing a little perfume and highlighting the assets I still have that aren’t affected by my illness.

It’s not bad for my self-esteem either. In fact, on my worst days I try even harder to find a nice outfit, put on make up and do fancy braids in my hair. I like looking good (and it’s hard to help such a natural phenomenon anyways.)

And as for the future?

11 thoughts on “Your Long Term Relationship, Your Sanity, and Your Chronic Illness: Part 2”